As the LNU Lightning Complex Fire raced toward Vacaville and other wildfires spread across the Bay Area Wednesday, the blazes also appeared to take down power lines and cell-phone towers in their path, adding unplanned outages to the anticipated rolling blackouts that could come in the afternoon.

The loss of power and damage to systems threaten critical Bay Area cell-phone and internet infrastructure used for emergency warning systems and for residents to find critical information online.

While providers like AT&T, Verizon and Comcast have planned for power outages, their systems may face a critical test as the Northern California fire siege affects large portions of the region and combines with rolling blackouts that the state has not experienced for decades.

More than 5,000 residents in Vacaville and the surrounding area are still without power, and more than 4,000 in Santa Cruz and San Mateo counties near the CZU August Lightning Complex Fire, according to the PG&E outage map. High heat, high demand and lightning also caused power outages Wednesday morning, according to a tweet from PG&E.

Power outages in the Bay Area peaked at 5:17 p.m. yesterday, when 24,000 customers in Napa county were without power, wrote Jeff Smith, a spokesperson for PG&E, in an email. Electric service was proactively turned off for some customers on Aug. 17 and 18 at the request of firefighters, added Brandi Merlo, another PG&E representative, in an email.

PG&E expects to restore power around 6:00 p.m for many affected by the outages near Vacaville and has no estimated restoration date for those in Santa Cruz, according to the outage map. The time it takes to restore electric service after a wildfire can vary wildly depending on the conditions. “We have to wait to gain access to areas impacted by the fire to determine the impact to our facilities. The length of outage usually depends on the extent of damage,” Merlo wrote.

Several residents in the evacuation zones reported on Twitter Tuesday evening and Wednesday morning that they had not received emergency alerts because of power outages. Those outages appeared related to the fires, since the rolling blackouts regulators had warned about were averted by conservation measures.

The Napa County Sheriff’s office uses a “hi-lo” siren (a European siren with a unique sound compared to a traditional siren) to warn residents who may have lost power or have no cell access to evacuate, said Henry Wofford, the public information officer for the sheriff’s office. Officers drive as slow as 5 miles per hour at times along streets with the evacuation order to ensure that people hear the sound and know to evacuate or seek information.

Officers will also go door-to-door when necessary to ensure people have evacuated, he said, stressing that for those who do receive the evacuation warning, early compliance helps prevent officers and fire officials from risking their lives later to save residents who are stuck in their homes.

Internet providers need access to power to distribute digital signals. “Our service requires commercial power to operate,” said Comcast spokesperson Joan Hammel. Comcast coordinates with Cal Fire both to ensure firefighters have internet access and to make sure they are aware of locations for critical internet infrastructure, she added.

Comcast uses backup generators to ensure continued internet access during a power outage, Hammel said, but noted that the company may be unable to sustain internet service across its network depending on the length and size of the power outage.

“The size and scope of this heat wave is immense,” Hammel said. “There is only so long we can support services on generators.” Even people with generators will lose internet access if the distribution center loses power.

If residents lose power and do not have access to their own generators, their home internet routers may go down, killing Wi-Fi signals and leaving them dependent on cell service. If the wireless phone network also fails, then residents may have no way to receive essential alerts and information.

If possible, Bay Area residents should have a plan in place that allows them to activate unlimited data plans for their cell phones during a power outage, Hammel said. Some wireless carriers have waived data caps or fees during past wildfire emergencies.

PG&E recommends that customers prepare for outages by keeping phones, laptops and other devices charged. Rotating outages typically last 2-3 hours, the utility said, while unplanned outages can vary in length. When still-raging fires prevent crews from reaching damaged areas to make repairs, outages can be lengthy.

The power outages and fires also affect cell towers. AT&T and Verizon have backup batteries or backup generators at most sites, but more than one million people lost cell service (and thus access to emergency alerts) during PG&E’s fire-prevention blackouts last year. 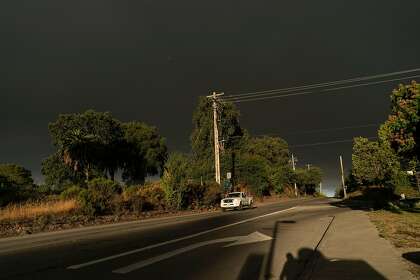 The California Public Utilities commission voted in July to require 72 hours of backup power at cell towers during emergency situations, and wireless providers have 11 months left to develop a resiliency plan and implement the required commitment.

San Mateo county resident Steve Portigal expressed frustration about the emergency warning system there, which sent him a link Tuesday evening that did not work on his mobile phone and then directed him to COVID-19 resources instead of wildfire information. Last year’s fires knocked out cell service where he lives, and he is unsure what to do aside from plan ahead and rely on neighbors if he loses cell service this year.

“While we are doing everything possible to minimize the impact of power outages, there are discrete areas where we cannot install generators due to topographical or other constraints. In these rare cases, some customers may experience service disruptions or degraded network performance until commercial power is restored,” Heidi Flato, a spokesperson for Verizon, wrote in an email.

“We understand the importance of keeping customers and first responders connected during emergencies, including power shut-offs. That is why we have invested more than $8.7 billion in our California networks from 2017 to 2019 and announced a three-year, $340 million plan to add backup power to more cell sites,” wrote Jim Greer, a spokesperson for AT&T, in a statement.

And people without any internet or cellular access are in danger regardless of the state of the infrastructure. The Marin County Sheriff’s office located and evacuated 25 hikers within the wildfire evacuation zone from the Point Reyes National Seashore last night, where they had limited or no cellular service, according to a Tweet from the sheriff’s office.

Because previous years have shown issues with the wireless emergency alert system, people should remember that “they are their best warning system,” said David Passey, a Federal Emergency Management Agency spokesperson. People need to pay attention to their surroundings, talk to their neighbors and share information.

Between broadcast alerts on TV and radio, the wireless emergency alert system, other alert systems used by local officials like siren and information shared person to person, “the layers of warning will address the majority of the public,” he added.