Nutritionists have revealed the ways quitting alcohol for 31 days can improve your health – and the major change that begins just one hour into abstinence.

Each year countless Australians temporarily give up drinking for ‘Dry January’ to restore themselves after the overindulgence of the festive season.

Experts say binning the booze for just one month can transform your health, provided the temporary abstinence leads to a more moderate and mindful approach to drinking in the long run.

Dietitians and fitness coaches promise even short periods without alcohol will improve memory, mental clarity and sleep, as well as promoting weight loss and reducing pressure on the liver which starts to cleanse itself just one hour after your last drink.

And for most participants, the habit seems to stick. 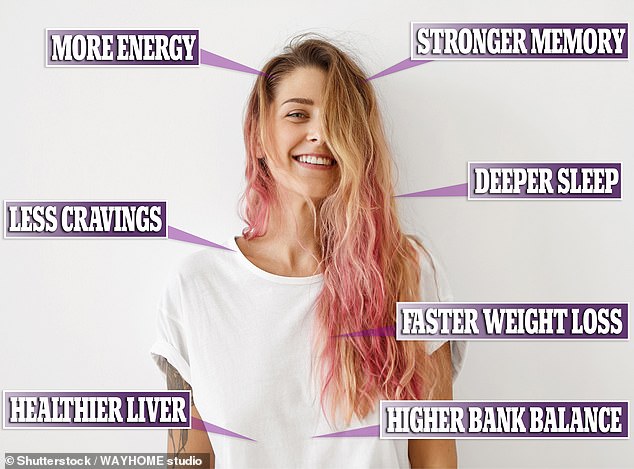 Quitting alcohol for just 31 days will improve memory, mental clarity and sleep quality, as well as aiding weight loss and reducing pressure on the liver – but temporary abstinence must lead to a more moderate approach to drinking in the long run, nutritionists warn

‘Dry January’ appears to have a long-term effect on the behaviour of the majority of participants, with 70 percent of those who abstained drinking still notably less seven months later, a 2018 study from the University of Sussex found.

A month ‘on the dry’ is top of mind more than ever before after 10 months of heavy boozing following the outbreak of the coronavirus crisis.

Household alcohol spending skyrocketed across Australia after the pandemic turned normality on its head, with Aussies dropping a staggering $2billion more than usual on booze during an unprecedented year of lockdown and confinement.

Drinkers spent an average of $1,891 per household on alcohol in 2020 – an increase of $270 on the 2019 total, figures from the Australian Bureau of Statistics show.

Brain: Drinking too much can affect your concentration, judgement, mood and memory. It increases your risk of having a stroke and developing dementia.

Heart: Heavy drinking increases your blood pressure and can lead to heart damage and heart attacks.

Stomach: Drinking even one to two standard drinks a day increases your risk of stomach and bowel cancer, as well as stomach ulcers.

They splashed considerably more on booze between May and November than they did over the same period last year, card data from Commonwealth Bank customers revealed.

In April, alcohol companies running Covid-themed marketing campaigns were slammed by the Foundation for Alcohol Research and Education (FARE) for encouraging Australians to drink excessively in isolation.

CEO Caterina Giorgi told Daily Mail Australia the industry watchdog was concerned about online ads featuring slogans such as ‘a bottle a day keeps the iso boredom away’.

‘Our concern is if people see messages from alcohol companies that talk about drinking more to get through isolation, then it is really exploiting this situation and we just think it shouldn’t be allowed,’ Ms Giorigi said.

A FARE survey conducted in April worryingly found a third of those purchasing more alcohol were doing so to curb anxiety and stress in lockdown.

The responses also revealed 32 percent of drinkers consuming more were concerned about the habits of themselves or those in their household.

Nine months later, against the backdrop of a worrying Covid outbreak in Sydney that has skipped the NSW border into Victoria, what can binning the booze for 31 days really do for you?

While knocking back red wine may be marketed as a great way to up your antioxidant intake, Sydney dietitian Lee Holmes says any nutritional value of alcohol is cancelled out by its addictive nature and health consequences, both physical and mental.

‘At its core, alcohol is a depressant, which means that when it reaches the brain, it slows down the body’s systems,’ Ms Holmes told Daily Mail Australia.

‘Because alcohol is difficult for the body to process and is absorbed quickly, even in the short term it can place extra pressure on the liver, as the liver can only process about one drink per hour.’

A 2019 study funded by St Vincent’s Hospital in Melbourne found excess alcohol consumption causes the most overall harm to Australians of any drug, surpassing both crystal methamphetamine (ice) and heroin.

Abstaining from alcohol for even one month enhances concentration, increases the ability to focus and reduces the risk of mental health issues including anxiety and depression. 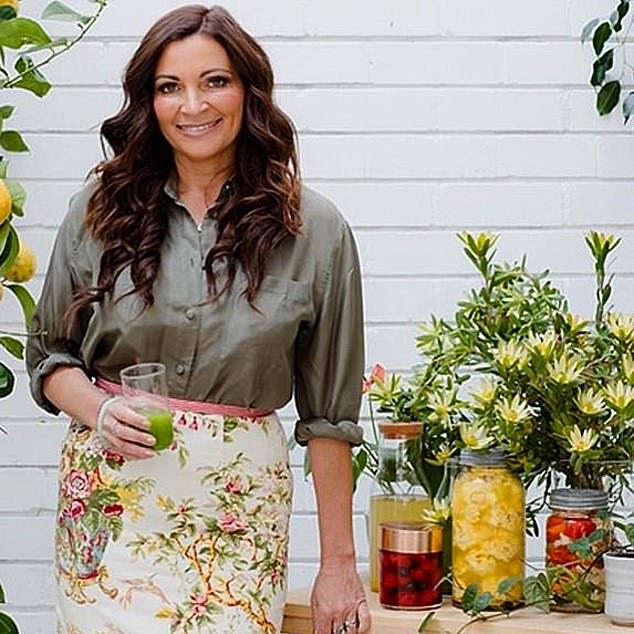 Lee Holmes (pictured) warns alcohol places huge pressure on the liver, which can only process roughly one drink per hour

Of 800 Australian ‘Dry January’ participants in 2018, 71 percent reported sleeping more deeply and feeling more refreshed in the morning throughout their month of abstinence.

This improvement is linked to the depressive effect alcohol has on the nervous system, which includes significantly reduced rapid eye movement (REM) sleep, the restorative stage where the body repairs cells and dreams occur.

After a night of binge drinking, the body is woken by a shot of adrenaline and cortisol – the stress hormone – which wreaks havoc with the natural sleep cycle.

Alcohol ‘physiologically makes you crave certain foods’, Australian personal trainer and nutrition coach Sarah Hopkins warns, which opens the flood gates to overeating when you were never hungry to begin with.

‘If there is a bowl of chips in front of you and you don’t feel like them, you won’t eat them,’ Ms Hopkins said in an episode of the Elevate podcast in December 2019.

‘If you have a glass of wine you will eat that whole bowl because it increases your appetite. It makes you eat more.’

That’s what makes Dry January such an attractive prospect for anyone looking to clean up their diet and drinking in one fell swoop. 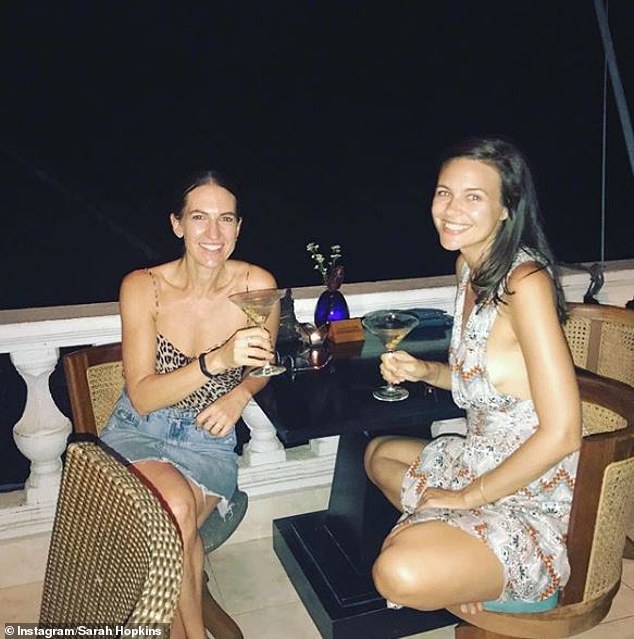 1. Space out your drinks – ‘Sip and savour the flavour! You’ll end up drinking less and enjoying it more.’

2. Three is enough – ‘Follow the three limit rule and stop after your third drink.’

3. Set goals before heading out – ‘Pre-plan your alcohol consumption. That way, you are more likely to stick to what you’ve planned.’

4. Set clear boundaries – ‘Tell your friends you are watching your alcohol intake, and don’t feel obligated to keep drinking with them if you want to drink mindfully. Mindful drinking is all about drinking while thinking!’

5. Think about tomorrow – ‘Remember everything you want to do the next day and what things a hangover would prevent you from doing. This will help you stay on track if you know you have things you need to do.’

6. Sharing is caring – ‘Share a bottle with friends – you don’t need to polish a whole one off on your own!’

7. Remember your power – ‘You don’t have to drink if you don’t want to. You always have a choice.

‘Over a 31-day period, abstaining from alcohol can help you maintain a healthy weight, taking into account what food you consume and your general lifestyle during that period,’ Ms Holmes agreed.

‘Most types of alcohol contain salt and sugar, two ingredients that lead to bloating and inflammation.

‘Giving it up for 31 days certainly won’t harm you – it’s good to give your body and gut a break.’

Benefits to gut health is the primary reason Australian yoga and Ayurveda teacher Amanda Nog supports the concept of a month on the dry. 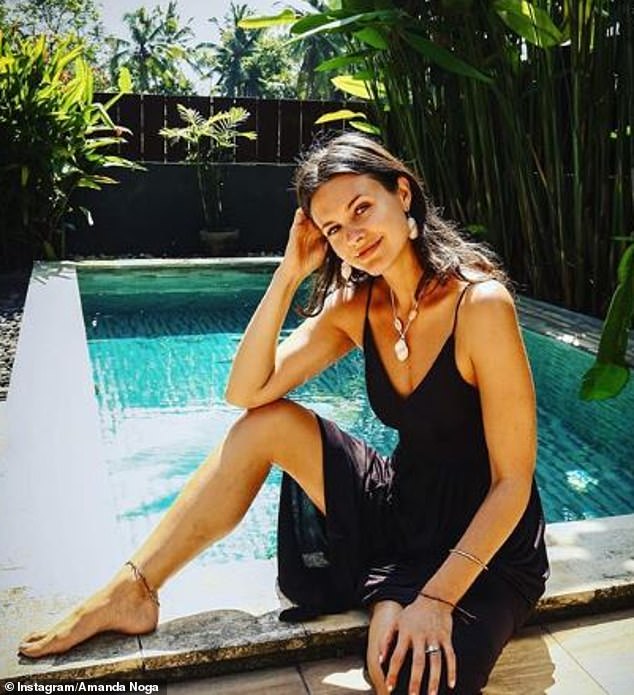 ‘Part of the reason we feel anxious or depressed is because most neurotransmitters, particularly serotonin, are produced in the gut,’ Ms Nog said told the Elevate podcast.

‘It’s actually having an adverse effect on the gut’s ability to produce serotonin, which is then making us feel anxious and depressed.’

Serotonin is one of the most important hormones in the human body, responsible for stabilising mood and promoting happiness as well as supporting communication between brain cells and other cells in the nervous system.

It also plays a vital role in digestion, sleep and blood sugar regulation – meaning any sort of deficiency is guaranteed to harm overall well-being in a major way.

Australian Guidelines recommend healthy adults should drink no more than two standard drinks on any day to cut the lifetime risk of harm from alcohol-related disease or injury.

They also recommend consuming a max of four standard drinks on a single occasion to reduce the risk of alcohol-related injury.

A standard drink contains about 10 grams of alcohol – the amount your body can process in an hour.

The average glass of wine served in a pub contains 1.5 standard drinks.

A HEALTHIER LIVER AND REPRODUCTIVE SYSTEM

Blood samples taken from drinkers who abstained from alcohol for 31 days showed a reduction in blood cancer proteins, lower blood pressure and a reduction in fatty tissue around the liver, a 2018 study from the British Medical Journal found.

Alcohol is an oestrogenic agent, meaning it raises oestrogen levels which results in rapid accumulation of body fat and hormonal imbalances for women.

‘If you’ve got something like PCOS, endometriosis or fibroids it’s almost imperative that you significantly reduce alcohol and certainly consider completely cutting it out,’ she said.

For support for alcohol-related problems and addiction you can contact Turning Point Services, or one of the many other services available, speak to your GP, local health service or call a helpline.

There are trained telephone counsellors available in every Australian state and territory.

‘Addiction’ means having a dependence on a substance or activity. Unlike someone who simply ‘wants’ something, a person with an addiction will have physical cravings and urges for the substance they’re addicted to.

Around one in 20 Australians struggle with a substance use problem or addiction each year, but only one in four seek help.

Being addicted to alcohol, sometimes called being an alcoholic, means that you have a physical dependency on alcohol. There are changes that happen in the brain of someone who drinks a lot of alcohol which makes them have physical withdrawals if they don’t drink.

Withdrawal symptoms can include insomnia, nausea, sweating, anxiety and physical discomfort. If you are experiencing dependence, it also means you need to consume more alcohol to achieve the intended effect.

Signs of alcohol dependence include:

* Sweating, nausea or insomnia when you don’t drink

* Needing to drink more and more alcohol to get drunk

* Drinking alcohol, or wanting to, when you wake up in the morning

* Fighting with friends and family about your drinking or going out