When the economy of the world is crumbling, new talents arise to save it from downfall. The arrival of blockchain technology was big news, being seen as the solution to all the headaches caused by government decisions.

The history of cryptocurrency is very rich, even if it’s been around for just a little over a decade. It all started with Satoshi Nakamoto’s whitepaper, and now we get to pay with crypto, even university courses.

It’s understandable why people are so hyped over this technology – because of its decentralized network. The crypto industry provides people with anonymity and security, making forgotten the presence of centralized entities.

Cryptocurrencies are the embodiment of freedom, and while it will take some time until they will get the power of fiat currencies, their future is undoubtedly bright.

Starting with Bitcoin, enthusiast developers created new features and technologies to support the blockchain technology, some of them successful and some of them not.

And guess who else tried to put his stamp over this industry – Mark Zuckerberg, with his Libra project. But did he make it? Well, he didn’t. In this article, we’ll find out why.

Now officially known as DIEM, Libra was supposed to be a digital currency built on its blockchain version. It was announced on June 18, 2019, with a whitepaper that has raised many questions.

Libra’s purpose was to create a way for people to access financial services, even if they don’t have a bank account. At the same time, it would be an alternative to sending money quickly internationally, without people having to pay bank fees.

This digital currency would’ve been linked to Calibra – a digital wallet supposed to be available on Messenger, WhatsApp, and later autonomous.

As opposed to general belief, Libra is not owned entirely by Facebook but by the Libra Association, whose members had to invest at least 10 million dollars to make Libra a stable coin.

The Libra Association was initially composed of 28 members, from companies and academic institutions to NGOs. Its role was to govern the Libra network, oversee the operation of payments, running the validator nodes that operate blockchain, and developing partnerships to expand Libra’s usability.

However, eight partners left the Association, including Visa, MasterCard, PayPal, and Vodafone. According to Zuckerberg’s testimony, the main reason could be the insecurity provided by the project:

“Mrs.Wagner (34:11): Why have they departed? Scores of stable partners have dropped out. Why?

Mark Zuckerberg (34:20): Well, congresswoman, I think you’d have to ask them specifically for their-

Mark Zuckerberg (34:26): I think because it’s a risky project, and I think that there’s been a lot of scrutinies.

In reality, there have been other reasons as well. As the Chief Operating Officer of PayPal noted, the media described Libra as a “Facebook product” which could harm companies’ image.

The cryptocurrency industry wasn’t something new. We have had Bitcoin since 2009, so there is already an entire community of crypto users. When the Libra was announced, there were two types of reactions on behalf of the crypto community.

People like Barry Silbert, the CEO of Digital Currency Group, thought Libra’s launch would cause massive adoption of cryptocurrencies. Therefore, it would open many opportunities for Bitcoin and altcoins.

On the other hand, people like Erik Voorhees, the CEO of ShapeShift.com, also highlighted that Libra is not a “pure cryptocurrency” and nobody should expect full privacy. Many crypto users wondered how Libra could overcome traditional cryptocurrencies, knowing Libra is not decentralized.

The main reason people were hyped over crypto was the independence of government, the possibility of managing your own money, the security provided by the absence of third parties. And Libra offers none of this.

However, Mark Zuckerberg insisted that the centralized system will be in motion until the users are educated to maintain its fair use. After this meets its goal, the system will become decentralized.

But that’s the thing. Zuckerberg itself announced the Libra project, and he was the one who represented the Association. That raised a lot of skepticism.

Why should people trust Zuckerberg?  How could people expect to be provided with financial and identity security by the smae entity who knows even when you last visited your grandparents?

It turns out this is the real reason people were against Libra and not its authenticity as a cryptocurrency. 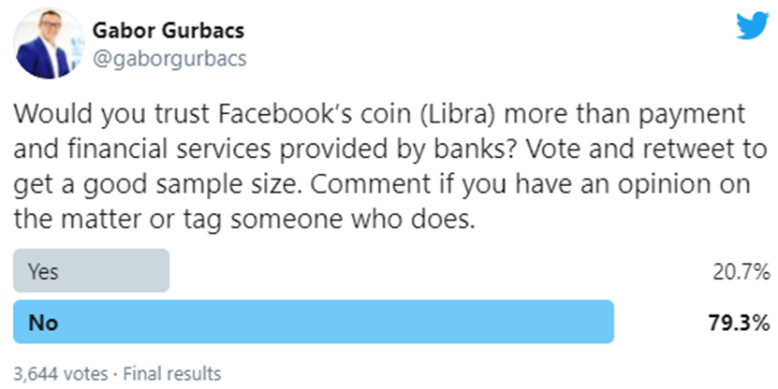 The first official who responded to Libra’s announcement was Bruno Le Marie, France’s finance minister, and he was harsh.

He immediately said that Facebook’s Libra is a real threat, “Our monetary sovereignty is at stake.” And his reaction is understandable. He is not against cryptocurrencies. France is one of the members of the MED7 – a European group that supports the crypto industry and wants to expand its usability.

There is a lot of evidence that in the last couple of years, the personal data from Facebook was sold without users’ consent. BBC News names a few in this article posted in December 2018.

The other countries responded as well, most of them against it because of the risk of money laundering, the lack of technical information in the whitepaper, etc. The countries that might give Libra a chance noted that they would accept it just if it meets some regulations.

A worldwide panic among officials began, so in the end, Zuckerberg was called for testimony on October 23, 2019. The testimony lasted 4 hours and proved what we said until now.

Although the testimony was supposed to be focused on the Libra Project, many Committee’s interventions missed the point. They demanded details about Facebook’s actions – even though Zuckerberg insisted that Facebook and Libra are two wholly separated projects and that he is not the only owner of it.

Despite those bothersome kinds of interventions, there were qualitative questions that provided us with the following details:

The end of the testimony highlighted the fact that, indeed, the government “should have a common understanding that innovation is coming.” – Mr. Mc. Henry (03:49:38)

However, there has been some harsh conclusions over Libra, one of the most significant ones being from J. Garcia (03:31:44):

“Let me just say this. From all of that I have heard in the last month-plus coming into this hearing and your testimonies this afternoon, I think Facebook has acquired too much power. It has become too big, and we should seriously consider breaking it up. Thank you.”

In a way, it would have saved the economy even if it would be centralized. Significant numbers of crypto users were outraged that it would not be any difference between being governed by politicians or by the Libra Association.

But here’s the thing. Libra Associations members succeed in launching and maintaining business companies and teachers from academic institutes. The difference between them and politicians is economic knowledge.

It is quite depressing saying that, but very few politicians know what they are doing. There are countries where you just need to graduate high school to meet the requirements. This is the reason why we face the consequences of over coinage and international conflicts.

On the other hand, it is hard to believe that our money will be safe if Facebook is implied. The simple fact that Calibra was intended to be linked with Messenger was a big question mark. Maybe if Mark Zuckerberg had waited until his reputation was in a good light, things would have been different.

Whether Libra was a good idea or not, the crypto industry inevitably became more popular, overcoming fiat. One of the reasons governors reacted that way was that they knew how many people would have joined the crypto world. So let’s not forget that.