A Tennessee poll worker was fired on Friday after allegedly turning away voters who were wearing clothing related to the Black Lives Matter movement, according to officials.

The worker was let go after a witness at the Dave Wells Community Center in North Memphis, Tenn., reported the incident to officials, according to Suzanne Thompson, a spokesperson for the Shelby County Election Commission.

Thompson said officials were told by an operations manager that the message on the clothing was “Black Lives Matter,” while State Rep. Antonio Parkinson said on his Facebook page that shirts or masks read, “I Can’t Breathe,” reports said. 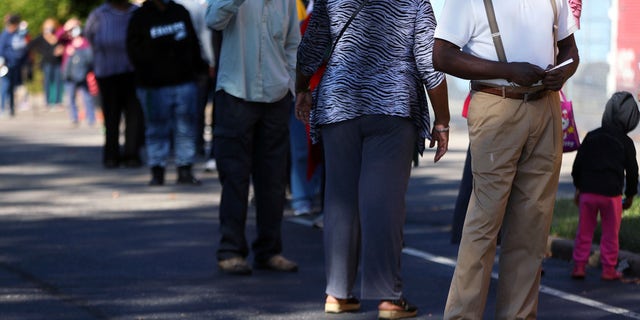 Voters wait on line at the Pursuit of God Church, Wednesday, Oct. 14, 2020, in Memphis, Tenn., on the first day of Tennessee’s early voting. (Patrick Lantrip/Daily Memphian via AP)

“That was pretty bad,” Thompson said. “They were not supposed to be turned away.”

While Tennessee law doesn’t allow voters at the polls to wear items with showcase the name of a candidate or political party, Thompson said the policy wouldn’t have applied because Black Lives Matter is not political, Memphis’s WREG-TV reported.

Thomas added that only a few people were told to leave.

Early voter turnout ahead of the Nov. 3 election has been strong in Memphis and throughout Tennessee. Early voting ends Oct. 29 in the state.