Reggie Jackson has no remorse for Curt Schilling over the former MLB great getting left out of the Baseball Hall of Fame.

Jackson told NJ.com in a story published Thursday that he would tell Schilling the only person to blame for not getting a ticket to Cooperstown is himself.

“I would say to Curt, ‘Look at what you did. You took yourself out of the Hall of Fame because of what you say and how to express yourself and how you think.’ Freedom of speech is great, but we can’t have a country with white supremacy, Nazis, Black Panthers, racist stuff and anti-Semitics. We can’t have people wearing swastikas because it’s a freedom of expression. Come on!” the New York Yankees legend told the website.

Jackson said he didn’t think Schilling’s request to be taken off the Baseball Writers Association of America’s Hall of Fame ballot was legitimate. He said it made the former Arizona Diamondbacks pitcher “look stupid.”

Schilling is an ardent supporter of former President Donald Trump, but Jackson said it wasn’t Schilling’s politics that are preventing him from the call to the hall.

“I don’t care if Schilling is conservative or not conservative,” Jackson said. “That doesn’t have anything to do with the fact that he’s stepping out on the balcony and yelling out something to defame Jews or Muslims or any other ethnicity or gender. Curt, get away from here with that.” 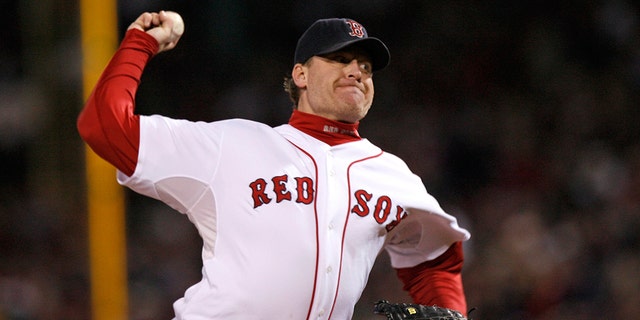 Schilling missed out on making the Hall of Fame. (AP Photo/Kathy Willens, File)

Schilling told Clay Travis on the radio host’s “Outkick the Coverage” show Wednesday that he believed it was his support for Trump that kept him out of the Hall of Fame.

“The hatred for President Trump and conservatives runs deep,” he said.

Schilling added: “You got 90% white, liberal college males standing in a clubhouse of players of every race, some don’t even have an 8th-grade education but are making $25 million a year. [The writers], who graduated from Harvard, are bitter.”

Nobody made the cut for this year’s Hall of Fame ballot. Barry Bonds and Roger Clemens were left off, as well.