Today Qualcomm is announcing a new commercial fast charging solution in the form of Quick Charge 5, taking advantage of the latest technology developments in charging circuits and leveraging the USB Power Delivery Programmable Power Supply (PD-PPS) standard in order to achieve charging powers of up to 100W. 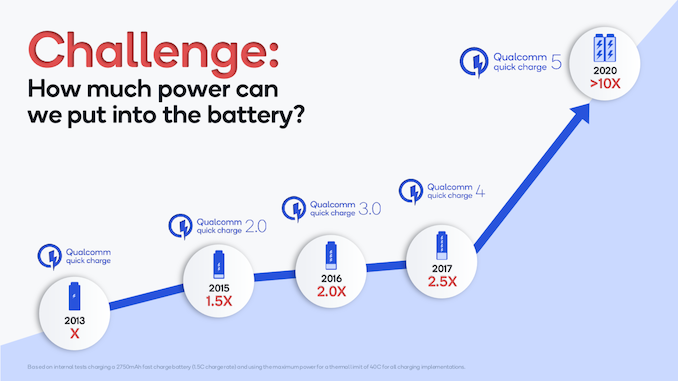 We’ve all been familiar with Quick Charge and its various implementations over the years, innovating beyond the classical USB power delivery limits of 5W over 7 years ago. In recent years, we’ve seen the maximum charge speeds continuously improve, going from 10W in Quick Charge 1.0, to 18W in 3.0, to up to 27W in recent 4.0-certified chargers which make use of USB-PD.

Today for Quick Charge 5, Qualcomm is again changing the charger and PMIC architecture to be able to quadruple the charging speeds, allowing up to 100W of charge power. 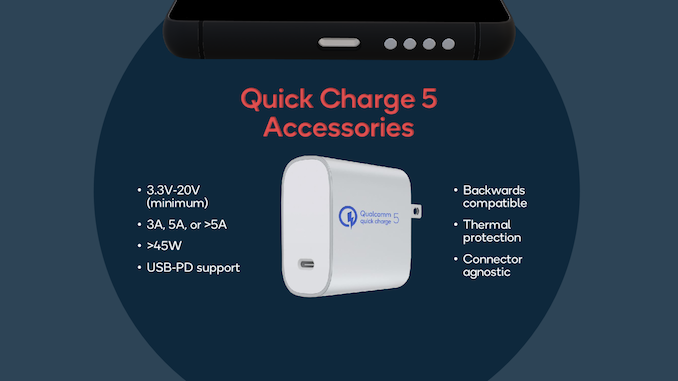 Fundamentally, one big change over the years for Quick Charge as a branded fast-charging standard from Qualcomm is that starting with QC4.0 the company has switched over from their own proprietary charge negotiation protocol (Essentially what Quick Charge originally was), to the USB-PD (Power delivery) standard, with the product branding being more of a overall certification platform as well as charge solution on the part of the phone’s internal charge architecture.

Today’s newest Quick Charge 5 in that sense is an evolution of what’s offered by the USB-PD PPS standard (To note: QC4 was already compliant with PD-PPS, although not actively using it as the voltage adjustment protocol), fully taking advantage of the voltage ranges of the spec to supply power to up to 100W.

In a USB PD-PPS solution, the charging architecture changes more fundamentally as we see some voltage regulation move from inside the phone on the part of the internal PMICs, to inside the actual charger which now is of higher complexity and flexibility in terms of voltages that it can provide. This is one part of QC5 and what PD-PPS enables to achieve higher charge speeds, by moving some of the conversion loss from inside the phone to inside the charger. 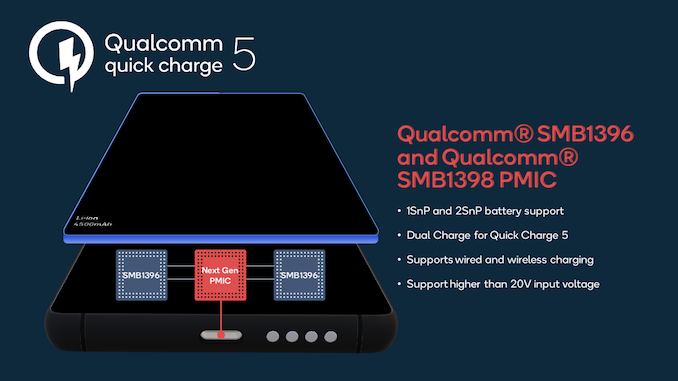 The second part of Quick Charge 5 is not so much the charging adapters or the communication protocol itself, but the charging architecture inside of the phone. Qualcomm’s big new addition with the new SMB1396 switched-cap converters and new SMB1398 battery PMIC is the fact that they’re architected to support 2S battery systems, meaning dual-cell batteries that are connected in series. The advantage of using this approach is that it raises the charge voltage of the system to double that of a single battery cell – going from example 4.4V to 8.8V.

This in turn allows for a doubling of the input voltage into the phone, bypassing or alleviating a crucial limitation to power delivery in a USB device: the cable itself, which only supports up to 3-5A on most cables.

The QC5 platform allows of up to 20V input voltage. Essentially with a standard lithium cell charge voltage at ~4.4V, doubling this up with the help of the dual-serial cell architecture to ~8.8V, and allowing for only a single switched-cap 2:1 conversion stage inside the phone, a charger could output ~17.6V at around 5.6A to be able to achieve 100W charging. That’s still generally more than what most cables will support, so likely Qualcomm’s peak figure here would be only in an ideal scenario. Any standard cable handling up to 3A would easily support up to 53W charging for example. 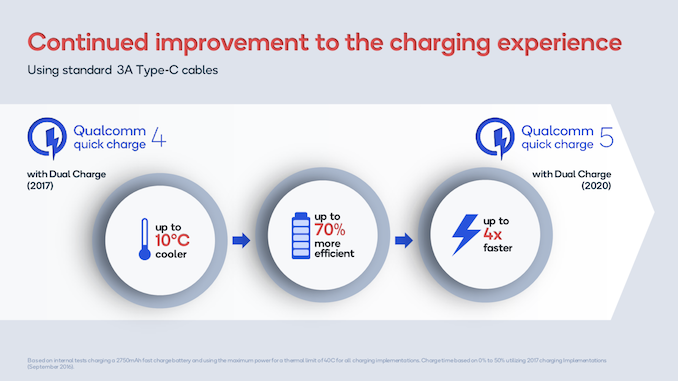 Qualcomm claims QC5 can be up to 10°C cooler, 70% more efficient and 4x faster than QC4. All these figures are fundamentally achieved by adopting more efficient conversion techniques and by moving some of the voltage conversion work to the power adapter itself. The limitation inside of a phone is heat dissipation, with Qualcomm here using a 40°C charging temperature as its own self-imposed limitation as to how hot a device can get. Most of this heat is generated by the PMICs inside the phone as the battery itself doesn’t actually get warm during charging.

The charge circuits of the new PMICs allows for a 3-level traditional buck converter along with a 2:1 / DIV/2 switched cap converter to provide a quoted maximum conversion efficiency above 98%. (To be able to maintain a 40°C temperature, a phone can only dissipate 3-4W maximum in my experience).

QC5 doesn’t dictate vendors need to use 2S battery layouts, and it’s likely that the majority of vendors won’t use them due to added battery volume overhead of using two cells (Less total capacity), as well as the fact that there’s added discharge inefficiency due to having to convert from a higher operating voltage (~8.4V vs 4.2V) during usage, also indirectly decreasing the usable energy capacity of the batteries.

Smartphones still using single battery cells will see advantages in charging speeds and thermals, although Qualcomm here states that generally these will be limited to around 45W peak power.

I asked the company if battery technologies and chemistries have advanced to the point where using such high charging speeds won’t degrade capacity retention of the cells, and the answer was “yes” although lacking any details or specifics. In conversations with other independent industry sources generally it’s agreed while there have been improvements over the years in lithium cell technology, these recent generations of very high-wattage charging comes mostly at a cost of increased battery degradation, which is why I’m still very sceptical of these recent charge standards, and why I see large vendors such as Apple or Samsung not engaging in this race. 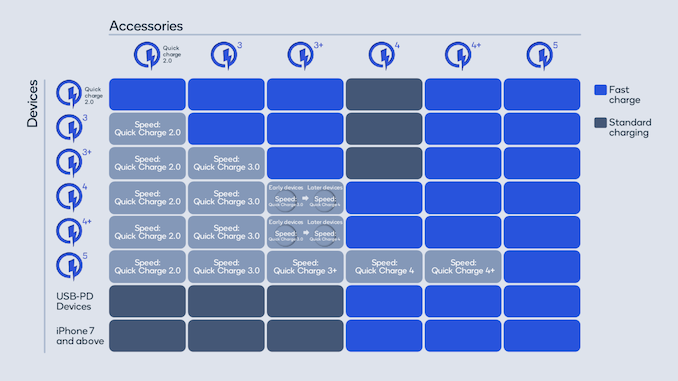 In terms of device and accessory compatibility, while the above matrix seems relatively complex, it’s quite simple, as a device will simply only charge as fast as a given adapter allows, and fast-charge capability is simply divided into QC protocols (QC4). Newer QC 4+ a 5 charger will still support the proprietary legacy protocols and allow fast charging of such devices.

The nice thing about QC5 and the fact that it uses PD-PPS as its underlying protocol, is that you don’t actually need a QC5 charger to be able to charge your device at QC5 speeds. A generic PD-PPS charger with the correct voltage and current range will suffice and would be fully compatible. For example, OPPO’s recent iteration of their fast-charging systems leverages USB PD-PPS as the protocol, with adapters supporting up to 20V 6.3A, essentially making it standards compliant and should in theory be fully compliant with any QC5 devices, or vice-versa any newer OPPO devices should support QC5 adapters, leaving the only real proprietary and problematic piece of tech being any special cables that support the higher >3A currents.

Overall, Quick Charge 5 doesn’t bring anything inherently new that wasn’t already introduced by some of the more aggressive Chinese vendors to the market such as OPPO, but it does it in a welcomed standards compliant way via PD-PPS, and also offering the commercial device-side PMIC architecture to allow for these new crazy-high charge speeds.