New bookings for Covid-19 vaccinations have been closed for the month of April after health bosses revealed a “significant” reduction in supply from the week beginning 29 March.

Regional NHS leaders received a letter ordering them to concentrate on completing vaccination of over-50s and other priority groups, as well as administering second doses to those who have already had a jab, while people aged under 49 must wait for their turn.

The development came against the backdrop of a furious row with Brussels, after European Commission president Ursula von der Leyen warned the EU was ready to block exports of vaccine to the UK in an effort to safeguard jabs for its own citizens, as parts of the continent face a third wave of the pandemic.

Foreign secretary Dominic Raab accused Brussels of acting like a dictatorship, while Downing Street made clear that it expected contracts for Pfizer vaccines from Belgium to be honoured.

“Frankly, I’m surprised we’re having this conversation,” said Mr Raab. “It is normally what the UK and EU team up with to reject when other countries with less democratic views than our own engage in that kind of brinkmanship.”

Health secretary Matt Hancock played down the significance of the NHS letter, insisting that the UK remains “on track” to meet targets to give a first jab to all over-50s by 15 April and every adult by the end of July.

He hailed the milestone of 25 million first doses, which was passed on Wednesday on the way to protecting half the UK’s adult population – including prime minister Boris Johnson – by the end of the week.

The shortage, caused by “reductions in national inbound vaccines supply”, was likely to last for four weeks, the letter said.

During this period, invitations to under-50s for jabs will be “only permissible in exceptional circumstances”, unless they fall into a priority group as health or care workers or sufferers from specific health conditions.

To ramp up doses given to over-50s, there should be dedicated sessions for groups with specific access requirements, extended visits to housebound patients and more care home visits.

Vaccination centres and pharmacy-led vaccination services must close all unfilled bookings from 29 March and ensure no further appointments are booked for the whole of next month.

“Our vaccination delivery programme was designed to be flexible, scaled up and diversified, in line with fluctuating international vaccine supplies,” wrote Dr Kanani and Ms Lawson.

But the reason for the slowdown remained unclear, with an AstraZeneca spokesperson saying on Wednesday evening: “Our UK domestic supply chain is not experiencing any disruption and there is no impact on our delivery schedule.”

Pfizer said deliveries “remain on track” for the first quarter of its 40 million dose agreement with the UK, with a “steady supply of vaccines” delivered to the nation.

“Supply is always lumpy and we are on course to deliver the offer that everybody who is aged 50 and above will be able to get vaccinated by 15 April,” he told a Downing Street press conference. “I recommit to that today.

“We are committed to all adults being able to get the jab by the end of July and we are on track to deliver on that commitment.”

He added: “We regularly send out technical letters to the NHS to explain the ups and downs of the supply of the future weeks and what you are referring to is a standard one of those letters.”

Mr Hancock said the NHS will do “whatever it takes” to reach all those in the most vulnerable groups who have not yet come forward to receive their jab before moving on to people in their forties. 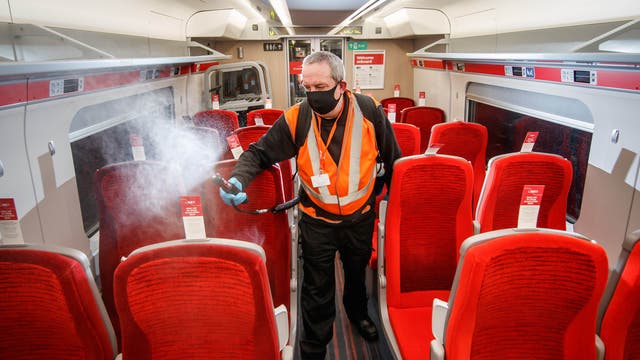 But shadow health secretary Jonathan Ashworth said: “People across the country will be anxious and worried that the booking of new first dose vaccination appointments will be paused from the end of March.

“Matt Hancock needed to explain exactly what these supply issues are and what he is doing to resolve them. Trying to dismiss or downplay the legitimate concerns of anxious people waiting for a vaccine is simply not good enough.”

In Brussels, Ms von der Leyen said that “all options are on the table” to ensure reliable deliveries of doses to the 27 member states, most of which have vaccinated little more than one in 10 of their populations and some even fewer.

She said the bloc would use “whatever tool” it needed to ensure doses reached its citizens, including seizing production of vaccines, and singled out the UK as “country number one” in terms of exports from the EU.

She spoke on Wednesday as data showed coronavirus cases surging in some member states, including France and Italy, where a fresh lockdown has just been introduced.

“We want reliable deliveries of vaccines, we want an increase in the contracts, we want to see reciprocity and proportionality in exports, and we are ready to use whatever tool we need to deliver on that,” she said.

“This is about making sure that Europe gets its fair share.”

Ms von der Leyen said that “reciprocity” in terms of vaccine supply had not been seen in the case of the UK, which had received 10 million doses from the EU in the last six weeks, while Europe was “still waiting” for doses ordered from two sites in Britain.

So far, only one vaccine export authorisation request has been refused, out of 315 submitted to the bloc, when Italy blocked the export of more than 250,000 doses to Australia.

Downing Street urged Brussels to “stand by its commitment” that it would not restrict vaccine exports.

Boris Johnson’s official spokesman said that in a phone call with the prime minister earlier this year, Ms von der Leyen had said that the focus of the EU’s supply mechanism was transparency rather than restriction of exports to fulfil contractual responsibilities.