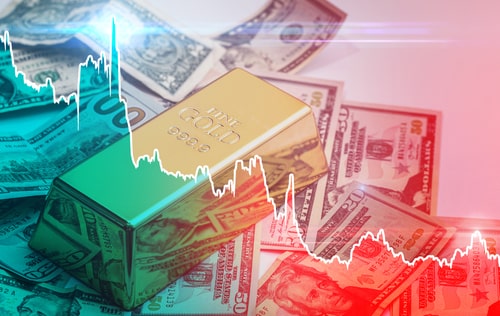 (Kitco News) After a selloff towards $1,800 an ounce, gold is up on some bargain-hunting with prices back above $1,830 despite a higher U.S. dollar on Monday.

The increase in market volatility come as markets are closed Monday in recognition of Martin Luther King Jr. Day.

With the U.S. dollar in control of gold’s price moves, this week’s focus is on the designated new U.S. Treasury Secretary Janet Yellen’s testimony scheduled for Tuesday. Markets are zeroing in on Yellen’s comments about the future of the U.S. dollar policy, according to analysts.

“The dollar has been working gradually higher over the weekend and part of this may be to do with the fact that Janet Yellen, Treasury Secretary-in-waiting, is due to testify on Capitol Hill tomorrow. She is expected to say that she does not favor a deliberate weakening of the dollar, preferring instead to see the currency valued by free-market movements. This, in principle, is dollar-supportive in that it is a change of policy, said StoneX head of market analysis for EMEA and Asia regions Rhona O’Connell.

The impact on gold will be determined by how much and in which direction the U.S. dollar moves in response, said Commerzbank analyst Carsten Fritsch.

“The kind of verbal interventions designed to weaken the USD that were a common feature of Trump’s presidency are now likely to be a thing of the past,” Fritsch said on Monday.

U.S. dollar strength has been weighing on gold, which tumbled to early-December lows over the weekend, hitting $1,800 an ounce.

On Monday, gold has recovered somewhat, with spot gold last trading at $1,838.20 an ounce, up 0.55% on the day. In the meantime, the U.S. dollar index continued to climb, trading near the highest level since Dec. 21 and on track to test the 91 area.

“Gold price movements in the recent past have been very much a function of the dollar’s movements, with the price in euro terms moving more or less horizontally over the past week,” said O’Connell. “The fall towards $1,800 came largely during U.S. hours last Friday and then there was a further sharp selloff at the start of Asian hours this morning, before an almost equally rapid recovery on bargain hunting.”

Friday’s moves were likely amplified due to the closure of the U.S. markets on Monday, O’Connell noted.

Despite the recovery on Monday, gold is showing some signs of weakness, Fritsch pointed out.

“Friday’s price slide meant that gold also closed the second week of trading in the new year down. Higher U.S. bond yields and a firmer U.S. dollar are continuing to weigh on its price,” he said. “As expected, gold’s price slide in the week before last was largely driven by speculation. According to the CFTC’s statistics, net long positions held by speculative financial investors were slashed by a third to 78,200 contracts in the week to 12 January, their lowest level since May 2019.”

Pepperstone’s head of research Chris Weston highlighted a red flag to keep an eye on in the near-term.

“Friday, we saw real U.S. Treasury yields lower by 4bp, but yet the USD rallied, and gold came off – this is a red flag to me. In fact, the way gold is trading today makes me quite concerned that the market feels this part unwind of reflation bets has more to go,” Weston said on Monday. “I see this fall as ‘bad’ real yields decline – where both inflation expectations and nominal Treasury yields move lower together, with nominal Treasury yields falling faster than inflation expectations. Given how frothy and overextended markets have been, this may be the start of a slight unwind, with the USD at the heart of the move.”

Another major event to keep an eye on this week is President-elect Joe Biden’s inauguration on Wednesday. “Security in Washington DC and many state capitols has been beefed up due to concerns of violence,” said BBH’s global head of currency strategy Win Thin.

Also, markets are paying close attention to the Bank of Canada meeting on Wednesday as well as the European Central Bank, the Norges Bank, and the Bank of Japan meetings on Thursday.