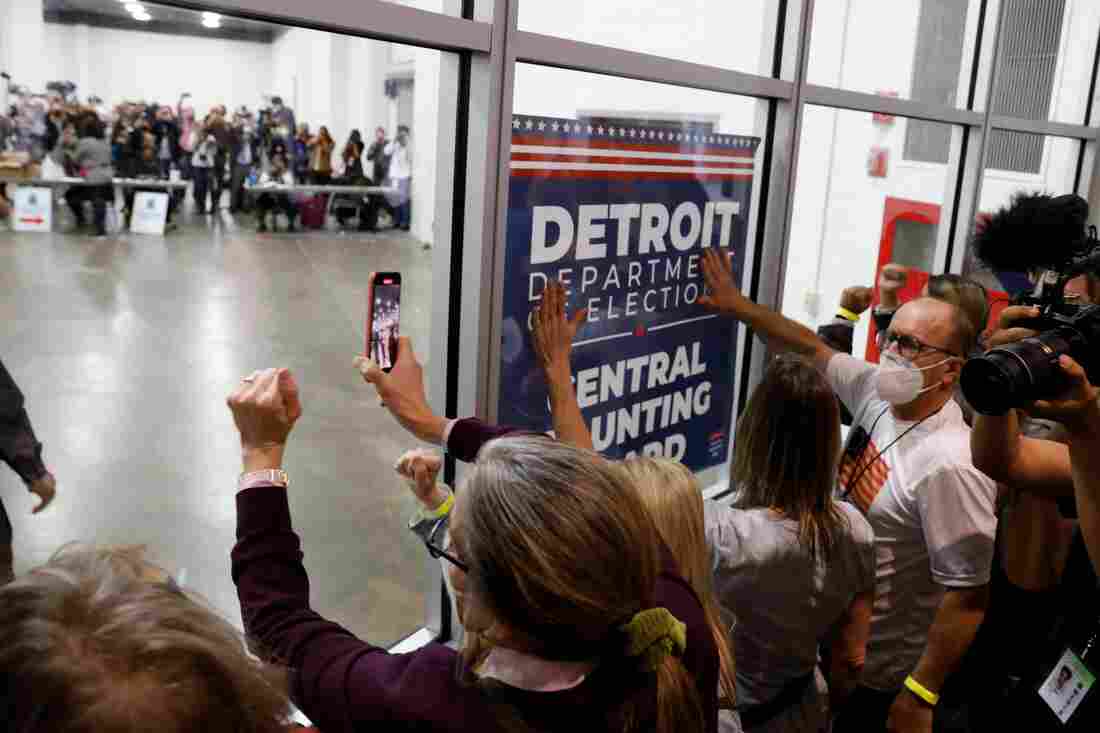 Supporters of President Trump bang on the glass and chant slogans outside the room where absentee ballots for the 2020 general election were counted at TCF Center on November 4, in Detroit, Mich. 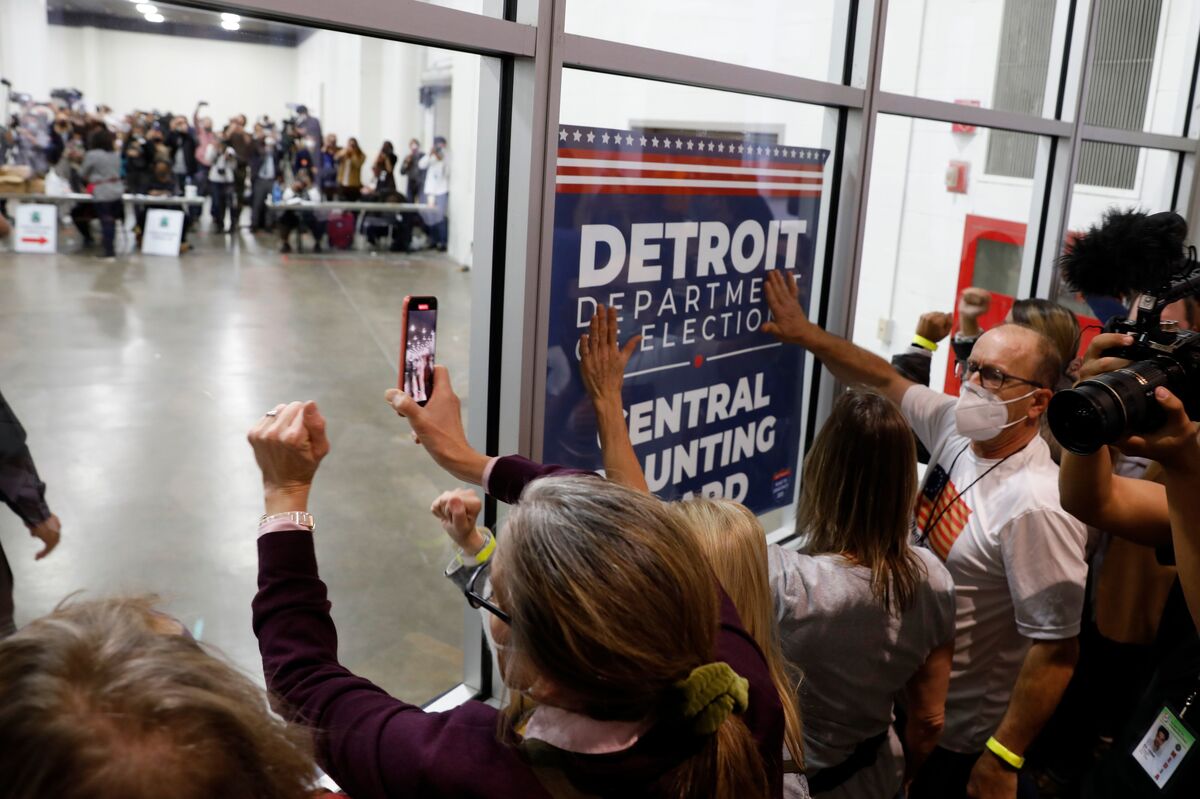 Supporters of President Trump bang on the glass and chant slogans outside the room where absentee ballots for the 2020 general election were counted at TCF Center on November 4, in Detroit, Mich.

“Obviously [we] never could’ve imagined…” she paused to laugh, emphasizing her next word, “anything… about this year. But it’s an honor to play a role here in finalizing this vote, respecting the will of the people and making sure Michigan’s voice is heard.”

That day, electors were escorted in by the state police. The building itself was closed to the public and other lawmakers because of credible threats of violence after more than six months of political turmoil in the state.

That evening, after weeks of rampant allegations of election fraud by President Trump’s supporters, the Republican state Senate Majority Leader Mike Shirkey tweeted that the Michigan Senate had “not discovered material proof of malicious behavior thus far. If Sidney Powell or anyone else has concrete proof that voting machines were manipulated, it’s past time they share it.”

But the damage was already done. Outside, state police blocked a handful of Republican state representatives who tried to gain access to the building in order to seat an alternate slate of electors as the state’s 16 electoral votes were cast for Joe Biden, who won the state by 154,188 votes.

In the dumpster fire year of 2020, Michigan has had its own political storm going all the way back to the March primary when the state detected its first cases of COVID-19. The weekend before, Vermont Sen.Bernie Sanders drew thousands to rallies in Ann Arbor and Grand Rapids and President-Elect Joe Biden gathered large crowds in Detroit.

Protests and the alleged plot to kidnap the governor

In the spring, frustration with Gov. Whitmer’s stay-at-home orders manifested in the country’s largest so-called gridlock protest in Lansing, followed by protests that rippled into the spring. Rallies became a place where extreme views and conspiracies could grow. Rally attendees who alleged Whitmer was a tyrant mingled with anti-vaxxers and heavily-armed protesters.

At a June protest, as an FBI criminal complaint later revealed, men linked to the militia movement who believed some state governments were violating the U.S. constitution, allegedly attempted to recruit others to attack the state Capitol and join their plan to kidnap Whitmer and try her for treason.

“Anytime you’re in a position of uncertainty, you’re going to be more willing to accept things that are false or misleading, so long as they just make you feel better,” says Dustin Carnahan, who studies misinformation as an associate professor of Communications at Michigan State University. “And I don’t think that was unique to us.”

But Carnahan says being a swing state made Michigan vulnerable to those who wanted to influence or sow doubt in 2020 politics.

Carnahan says that misinformation wasn’t central to the alleged plot to kidnap the governor or the protests, but kernels of misinformation were allowed to grow into larger conspiracies.

“What becomes dominant is the conspiracy — this overall kind of belief that this is part of some larger plot to seize control,” says Carnahan.

Immediately after the November election, misinformation was warped — some unwittingly, some in deliberate disinformation campaigns — into broader conspiracy theories. One theory alleged that widespread voter fraud had occurred at the absentee counting board in Detroit. Another claimed a clerical error in a rural Michigan county was evidence of a Dominion Voting System software manipulation. In Wayne County, some argued that disagreements should have prevented the certification of election results.

Underneath those, though, some say it was the failure to change state law around absentee ballot processing that created a post-election environment ripe for informational manipulation.

By law, Michigan’s more than 3 million absentee ballots could not be counted until election day. That night, it appeared as if President Trump had the lead, but by Wednesday as absentee ballots continued to be counted, Biden pulled ahead and Republican groups began recruiting supporters to flood the TCF center in downtown Detroit where absentee ballots were being counted. Protesters banged on glass windows chanting “stop the vote.”

“The American people need to have confidence in our elections,” declared Republican National Committee Chairwoman Ronna McDaniel, standing in front of a wall emblazoned with red, white, and blue Trump-Pence 2020 and “Keep America Great” signs. “Right now, we don’t have that because across the country Democrat officials are shutting down transparency, especially here in the state of Michigan.”

The press conference was just the beginning. What followed were countless lawsuits, affidavits from aggrieved Republican poll watchers and clerical errors that were touted by senior party officials as evidence of irregularities in the state.

Over the following weeks, the President repeatedly tweeted false claims about the election in Michigan and other states. After one board of county canvassers voted not to certify their election results (a move they reversed before their meeting adjourned) Trump falsely announced, “Wow! Michigan just refused to certify the election results! Having courage is a beautiful thing. The USA stands proud!”

In fact, at their scheduled meeting nearly a week later, the Board of State Canvassers certified the results that President-Elect Joe Biden won the state by 154,188 votes.

Yet Republicans in the state say they continued to field calls from angry supporters who believed assertions of widespread fraud, even after they were thrown out of state and federal courts. The Republican-controlled state legislature held oversight hearings into alleged “irregularities” allowing witnesses, many of whose affidavits had been tossed out of court, to testify in blockbuster hours-long hearings.

Former Director of Elections, Chris Thomas, who served a long tenure under both Democratic and Republican Secretaries of State, explained it this way while testifying under oath:

“Few elections are perfect. There are mistakes for sure. However, it is an unreasonable leap to equate mistakes with fraud. Quite simply fraud is not a mere mistake. Fraud requires intent.”

It isn’t unusual for misinformation that begins with some small element of truth to make way for a larger conspiracy with the power to erode faith in the democratic process, says Carnahan, the associate professor of Communications at Michigan State University.

“To what extent do we allow these people to have a platform to make their points, no matter how unfounded or misleading they are?” he asks.

Fallout from Giuliani in Lansing

When Rudy Giuliani, President Trump’s lawyer, appeared in Lansing with witnesses to present allegations of election fraud, state Rep. Cynthia Johnson, a Democrat who represents Detroit, asked why witnesses weren’t testifying under oath and why there were no Democratic election workers testifying.

“The world is watching us right now,” Johnson said, pressing the Republican committee chair to answer her questions before he gaveled her down for being out of order.

After the hearing, clips of Johnson circulated on conservative media. Johnson received lynching and death threats, some of which she made public. When she posted a Facebook Live video urging her supporters to “Do right. Be in order. Make them pay,” edited clips made the rounds on the conservative social media site Parler. Johnson was later stripped of her committee assignments by Republican leadership for making threatening statements.

Johnson told the Michigan Advance she viewed the backlash as a “digital lynching.” At later hearings, the CEO of Dominion Voting Systems and a former longtime elections director were put under oath.

Days before Christmas, Senate Majority Leader Mike Shirkey told Bridge Michigan, “Our investigation, which has been very intense, discovered none, none of the allegations and accusations against Dominion [are] true.”

“The legislature had the right and responsibility to review election systems and air-out serious claims of fraud,” says Republican public relations consultant John Sellek, which gave clerks an opportunity to lay out the facts.

But in attempting to wage peace with angry Trump voters state legislators also allowed, “Giuliani and his team put on an embarrassing show that ultimately exposed the clear lack of evidence of voter fraud and likely backfired with somewhat-questioning voters who then saw the entire thing turned into a skit on Saturday Night Live,” says Sellek.

He says after a year rife with misinformation and conspiracy, “Frankly, it is what comes next as far as election security and conspiracy busting that will matter most.”