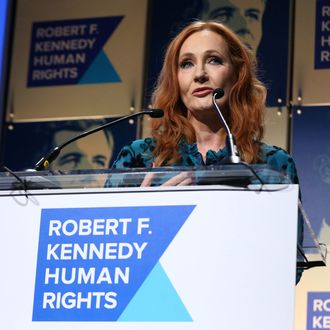 J.K. Rowling says she’s returning the Robert F. Kennedy Human Rights Award given to her in December 2019 after the president of the organization, Kerry Kennedy, criticized Rowling’s transphobic views. “Over the course of June 2020 — LGBTQ Pride Month — and much to my dismay, J.K. Rowling posted deeply troubling transphobic tweets and statements,” Kennedy posted on the organization’s website on August 3, referencing J.K. Rowling’s 3,670-word statement titled “J.K. Rowling Writes About Her Reasons for Speaking Out on Sex and Gender Issues.” “From her own words, I take Rowling’s position to be that the sex one is assigned at birth is the primary and determinative factor of one’s gender, regardless of one’s gender identity — a position that I categorically reject,” Kennedy continues. “The science is clear and conclusive: Sex is not binary. Trans rights are human rights.”

Rowling responded with a statement on her own website on August 27, saying she’s not transphobic or “responsible for harm to trans people.” “I am deeply saddened that RFKHR has felt compelled to adopt this stance, but no award or honor, no matter my admiration for the person for whom it was named, means so much to me that I would forfeit the right to follow the dictates of my own conscience,” she took the time to write. The very people who helped her reach success, Harry Potter fans, Daniel Radcliffe, Emma Watson, Rupert Grint, and more, have distanced themselves and disavowed her comments publicly. Even book sales are lagging. And, yet, somehow she’s still loud as heck on the internet.