Solemn and serious, the soon-to-be 88-year-old founder of the acclaimed Dallas advertising and marketing firm that bears his name prepared in solitude for the most emotionally fraught staff meeting of his lengthy career.

“I am firing myself” was the message Stan Richards delivered to the company’s 650 employees via Zoom Thursday afternoon.

The move was Richards’ attempt to stop a week of bleeding and internal turmoil caused by his racially insensitive remarks, which cost The Richards Group a half-dozen big-name clients in a rapid-fire couple of days.

“If this was a publicly held company, I’d be fired for the comments I made,” he said. “But we’re not public, so I am firing myself. Our employees, first and foremost, deserve that.”

The controversy erupted this week over Richards’ description of a Motel 6 campaign concept as being “too Black” for the Carrollton-based motel chain’s “white supremacist constituents.” His remarks came during an internal meeting over an idea to celebrate black artists in a Motel 6 campaign.

The motel operator promptly fired Richards’ firm after his comments were publicized. Motel 6′s iconic “We’ll leave the light on for you” slogan in 1986 is what propelled Richards’ company into the largest independently owned agency in the country.

In an interview with The Dallas Morning News, Richards said the exodus is understandable.

“I made a mistake. The biggest mistake of my life. One I will never be able to adequately explain or take back. All I can say is that I was wrong,” he said.

Richards said the company, which brought in about $200 million in revenue last year, will have to make cuts because of the business it has lost.

“The company’s going to have to get smaller,” he said. “There’s no question about that, because a considerable part of our income has gone away.”

Richards told The News he transferred ownership of the company about eight months ago to a nonprofit that he wouldn’t identify. He said the nonprofit is contractually bound not to interfere in the agency’s operations. He first discussed the idea in 2015 as his exit strategy.

He said he will have “no role in the company” beginning Thursday, with his hand-picked successor and 40-year co-worker Glenn Dady taking over. In December 2019, Richards named Dady as his successor but said he never saw himself retiring.

Despite his age, Richards had once famously said he’d keep doing the job “till I croak.”

Richards ran the ad agency for decades with what’s been described as a “fiercely independent” mindset.

On Thursday, the once-fierce leader was visibly distraught. He described a meeting he had planned to have with a group of MBA students at Southern Methodist University immediately after industry trade publication Ad Age first reported on his remarks.

“I thought about it a long time,” Richards said, tears welling behind his signature round-rimmed glasses. “I thought I’d cancel.”

But he decided that canceling would be too cowardly and he followed through with the meeting, answering students questions about his comments, he said.

The Richards Group also announced plans Thursday to create a new position that would influence agency decisions on diversity, equity and inclusion. It also plans to conduct bias training with employees, audit its current policies and review all of its current work to ensure it is “culturally relevant.”

“The goal of these changes and initiatives is to enable The Richards Group to learn, heal and ultimately recover as a stronger, better agency,” the company said.

Richards departs with a list of honors as long as his tenure. In 2017, he was inducted into the American Advertising Federation’s Advertising Hall of Fame. In 2014, the University of Texas bestowed its advertising and public relations school with his name – Richards called it “the greatest honor that I’ve received in a long, working life.”

This week, university leaders said they planned to speak directly with Richards about his remarks and listen to concerns raised by faculty, staff and students before deciding “how best to respond consistent with our values.”

Richards told The News that his immediate focus will be on his relationship with the University of Texas.

“I will be focusing a lot of my attention on that school, helping it be as good as it can be at attracting the best students,” he said.

Richards moved to Dallas in the early 1950s after graduating from Pratt Institute in New York. He worked for an agency briefly, then freelanced graphic design work and eventually grew his business into a full-fledged marketing agency.

In 2016, when Chick-fil-A dropped his agency after a 22-year run, Richards described it as more of an emotional blow than financial toll. His team dreamed up the “Eat Mor Chikin” cow campaign in 1995 and it’s considered one of the most iconic in fast-food history. 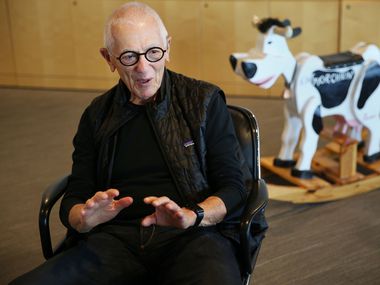 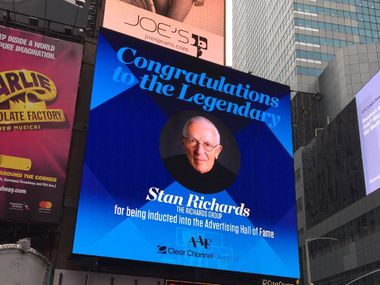 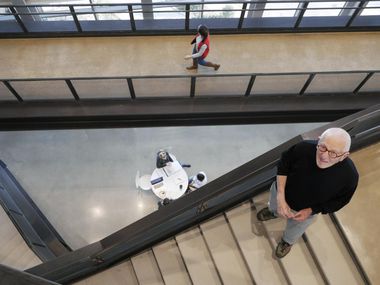