Waking up to a flood of notifications and tweets all about you.

Something you tweeted some hours ago or a day before has become a trending topic.

Wow, you have become famous thanks to that single tweet.

But it isn’t easy to deal with because your career and brand image are on the line.

That single tweet has ruined your image and you are at the mercy of others.

Something you thought might only be visible to your two-digit followers has now gotten thousands of retweets and comments.

In the next few hours, you receive calls from family and friends.

A few days in, your boss calls to let you know you’re fired. Okay, let’s not go this far, although it has happened to a lot of people.

The term for it – public shaming.

Wait a minute, I am not telling you a fairy story here, this is something that has happened and will continue to happen. And who knows, you might be next! 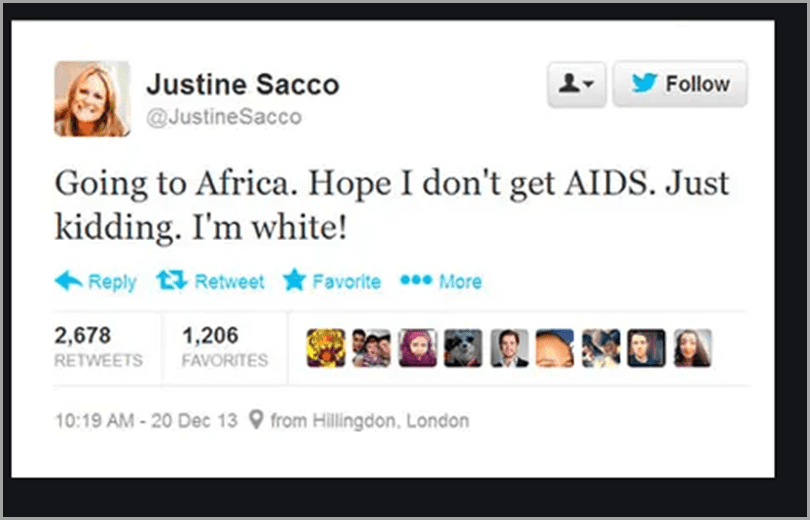 That single tweet changed Justine Sacco’s life, not for the best.

But the tweet she thought was just trying to make a joke made her a laughing stock.

And the most painful aspect, you don’t plan for these things.

She had just 174 followers when she posted the tweet.

The tweet got picked and retweeted by different influencers with the motion, “Fire Justine”.

Just like you guessed, she was fired. And the critical point is that a tweet led to that.

A tweet tarnished her image and maybe her career.

Do you  remember Monica Foy?

“I can’t believe so many people care about a dead cop and NO ONE has thought to ask what he did to deserve it. He had creepy perv eyes…”

That was her single tweet that went also viral.

It was a tweet she made about a cop who was shot dead in the back of the head at a gas station.

While she might not have meant what she stated in the tweet, as she revealed on NYMAG, that it was all a joke.

Regardless of the motive or the meaning behind the tweet, her rise to fame wasn’t a pleasant one.

What about the recent one that happened to the CEO of CrossFit?

Not long ago, the CEO of CrossFit started to trend on Twitter.

And the main cause was a single tweet he made about coronavirus and racism.

Not only did a lot of Twitter fans nail him on the platform, some even threatened Crossfit’s partners to quit their partnership with CrossFit.

And some also vowed to never order a service from CrossFit again.

To cut a long story short, he resigned from his position.

Wondering what that platform could be? Ads? No. The platform is none other than Elon Musk’s Twitter account.

Whenever there’s news or promotion for Tesla, Elon Musk has always tweeted about them.

And the best part is that the news and other media sources lift the tweet or promotion from his account and make it a headline for the different news outlets.

So, even without doing a press release for products and promotions, his Twitter account has always done a perfect job.

Even for those not active on Twitter, they will hear about his tweets via other media outlets. So, a single tweet from his handle is worth millions of dollars.

And not just his alone, a lot of small businesses are also winning businesses via their Twitter account.

Obviously, it’s working for them.

“HELP ME PLEASE. A MAN NEEDS HIS NUGGS”

This is a tweet made by Carter Wilkerson in 2017 about getting Wendy’s free nuggets for a year.

He asked Wendy’s, how many retweets would it cost him to get a free chicken nuggets for a year, and they said; 18 Million.

He got his free nuggets for a year. For Wendy’s, that was a massive advertisement for them.

Even those that didn’t know Wendy’s before, got to hear about them thanks to the millions of retweets Carter brought for them.

It’s a win-win for both. Wendy’s got a massive promotion for their brand while Carter got free nuggets for a year.

Taking a deep look into how Twitter has negatively and positively contributed to businesses and lives, it’s safe to call Twitter the new press.

But Twitter being the new press doesn’t have much to do with you, right?

If you recognize the power of Twitter to either destroy or grow lives and businesses, you’ll know how to wield its power.

As sad as it is, a lot of people have been publicly shamed just because of a tweet.

There are two sides to everything.

And that leads me to the final question.

Is it right to call Twitter the new press?

Guest author: Akinduyo Eniola is a content marketer for hire and internet researcher that writes about Saas, digital marketing, and entrepreneurship. He has been featured on CoSchedule, Teamgate, and few other Saas blogs.