Still, there are important differences between the opposition to masks in 1918 and what we are seeing during the 2020 coronavirus pandemic in America, according to historians CNN spoke with.

The “Anti-Mask League” protest in San Francisco “was an orderly protest compared to people fighting in Walmarts today,” said Dr. Howard Markel, a medical historian and a physician who leads the Center for the History of Medicine at the University of Michigan.

Just last month in Michigan, the day after Gov. Gretchen Whitmer imposed a mask mandate, a man was shot dead by police after stabbing a male customer in a dispute over not wearing a face mask in a store.

“Today, the anti-mask sentiment has a virulence and violence of its own that we didn’t see back then,” Markel told CNN.

The 1918 influenza pandemic
killed an estimated 675,000 Americans, according to the CDC. At the time, public health authorities and groups like the American Red Cross strongly recommended that Americans wear face masks to curb the spread of the virus, along with following social distancing guidelines and practicing proper hygiene.

In 1918, “lots of people grumbled about wearing masks, or even refused to do so, but they weren’t doing so because of a political stance or partisan allegiance,” said Alexander Navarro, assistant director of the Center for the History of Medicine at the University of Michigan.

While some people had ideological reasons for not wanting to wear masks, and others saw masks as an infringement on their freedoms, these arguments didn’t fit as neatly as they do today in the larger partisan divide.

“The party system a century ago wasn’t as heavily aligned along ideological lines, and certainly not along social and cultural issues to the same extent it is today. Today, there are people who refuse to wear a mask out public simply as a way of ‘sticking it to the libs,'” Navarro said.

During the war, mask wearing was patriotic

By 1918, the use of masks in medical settings was widespread as more doctors subscribed to germ theory and saw the need to maintain sterile conditions in operating rooms, according to Navarro.

At the time, health officials were aware that influenza was a respiratory disease spread through droplets, so masks were seen as a useful tool to contain the virus. Their use was widely recommended and made mandatory in some cities. 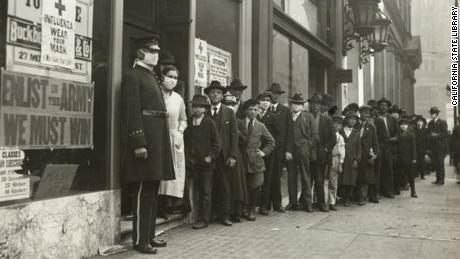 The safest masks were made out of several plies of surgical gauze, a material that wasn’t easily accessible to the general population as World War I was unfolding, Navarro told CNN.

Most masks worn by regular people were made of a cheesecloth-like gauze or various types of fabric. Newspapers would publish guides on how to sew your own mask, and
highlight fashionable styles made out of chiffon to entice women to wear them, Navarro said.
With the country at war, wearing masks was seen as patriotic, and “mask slackers” were often
shamed in public service announcements and news headlines for their defiance.

“The wartime flavor of this is huge. Slacker is what you called someone who wasn’t supporting the wartime effort,” said Nancy Tomes, a historian of medicine at Stony Brook University 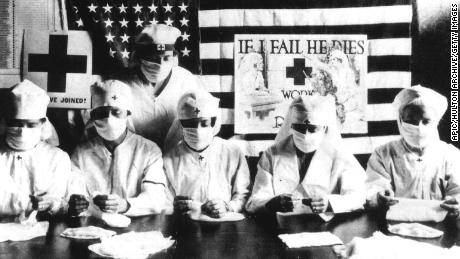 “Lots of elected officials as well as public health officers were telling people to wear masks as part of their civic duty,” Navarro told CNN. “They were trying to tap into this idea that if you couldn’t be over there fighting alongside our boys overseas, you could be doing your part here on the home front.”

It’s important to note how in 1918 America, the response to the pandemic was largely left up to community leaders at the local level.

“Nobody really expected the federal government to be involved in a crisis like this outside of the military response and quarantining of military camps,” Navarro said.

That expectation changed after the Great Depression and the New Deal, ushering an era when government intervention in times of national crisis was more widely accepted.

According to Markel, the opposition to wearing masks was “a very minor aspect” of the 1918 pandemic, all things considered. These sentiments were stronger in cities that instituted mask mandates, both Markel and Navarro told CNN.

“Places like Denver, Seattle, San Francisco, Oakland, Phoenix, Sacramento, Pasadena, Fresno, Juneau, and others made their use mandatory at one point or another during their epidemics,” Navarro said. 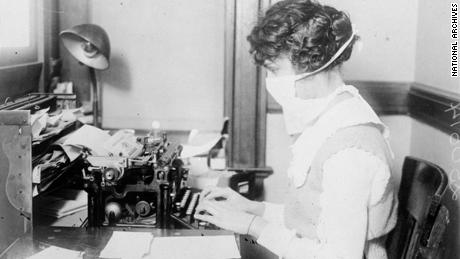 Western cities, where mask mandates were more prevalent, were hit by the flu pandemic in a matter of weeks after the virus ravaged the East Coast of the United States, Markel said. On the East Coast, masks were recommended but not mandatory for the general population.

According to Tomes, concerns about the effectiveness of enforcing a mask mandate may have kept local authorities from adopting them.

“The thinking was that they should be enforcing the anti-spitting laws that were already on the books after the tuberculosis epidemic, rather than introduce something new,” Tomes explained.

In San Francisco, where Health Officer Dr. William Hassler made it a point to make masks an integral part of the city’s pandemic response, two mandatory mask orders were implemented between 1918 and 1919, along with other interventions like business and school closures. The city was among the hardest hit by the flu, with a total excess death rate of 673 per 100,000 people. 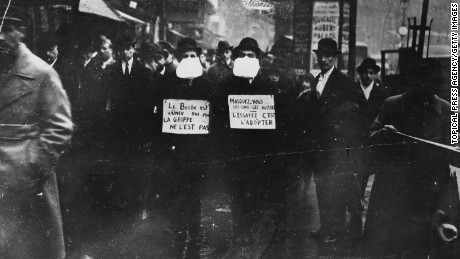 The first mask mandate in San Francisco went into effect on October 25, 1918, and while it wasn’t popular, news coverage of the time reviewed in the
Influenza Encyclopedia (a project of the Center for the History of Medicine at the University of Michigan) suggests that 4 in 5 San Franciscans were compliant. The reports are to be taken with a grain of salt, since no formal surveys were conducted, Navarro said.

Many San Franciscans, however, got in trouble with the law for breaking the rules. On October 27, 1918, the San Francisco Chronicle reported that 110 people were arrested and charged with “disturbing the peace” for not wearing their masks at all or not wearing them properly. On November 9, 1918, 1,000 people were arrested for being “mask slackers,” crowding the prison. The story was also published in the Chronicle.

As cases spiked again in the winter, a second mask order in San Francisco was issued in January 1919. That’s when the “Anti-Mask League” formed and held their protest, pushing back against the need for the new restrictions.

In Denver, a mask order was enacted to avoid a second round of closures and gathering bans in November 1918.

“According to newspaper reports, people just basically mocked the mask order. There was widespread opposition and defiance — people refusing to wear their masks,” Navarro told CNN. 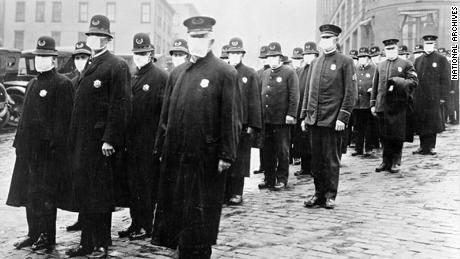 Portland is another city where public opposition delayed the adoption of a mandate.

“It took the health officer three tries before an order was passed, to go into effect if the epidemic resurged again,” Navarro said.

The order was finally adopted in the winter of 1919, but by then the epidemic in Portland had largely passed, and the measure never really went into effect, Navarro said.

Why were some cities more adamant than others about instituting mask mandates?

“It was basically a judgment call,” Markel said. “If it was good enough for the operating room, maybe it was good for this, but there were no real studies like we would do or data to justify it.”

Tomes also suggested that the specific culture in California could have had an impact on their decision to insist on mask use, as a no-tolerance policy against “unhealthy behaviors of any sort.”

“California is a very health-conscious place, and that goes way back,” she said.

According to Tomes, even when in 1918 people also disagreed on how to best fight the pandemic, they did a better job than we are doing in 2020. 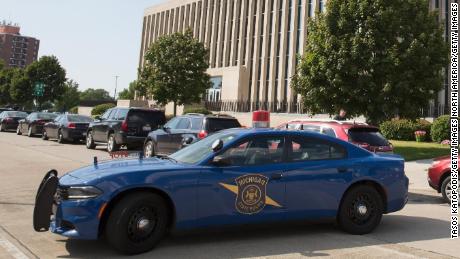 “We have so many more resources, but we are unable to deploy them effectively because of insane politics,” Tomes said.

No matter the public health intervention, there are always going to be contrarians and people who won’t comply, according to Markel.

But what he finds “particularly frightening” about the coronavirus pandemic in America is how “something that ought to be science-based and non-partisan and objective, in the 21st century, has become political,” he said.

The partisan divisions currently at play are influencing the way people behave and having harmful impacts on the public, according to Markel. 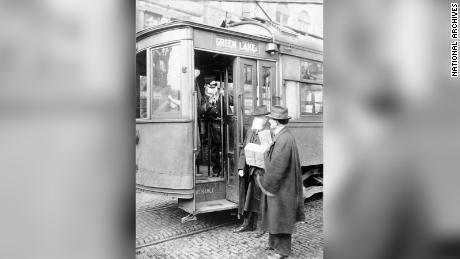 Study after study prove the effectiveness of masks as a tool to reduce the spread of coronavirus, and health officials have been insisting on this for several months. Just last month, Dr. Robert Redfield, director of the Centers for Disease Control and Prevention,
stressed how if every American wore a mask, the epidemic would be under control in four to 12 weeks.

The politicization of the coronavirus pandemic is “mind boggling” for Markel, who has studied global pandemics for more than 40 years. 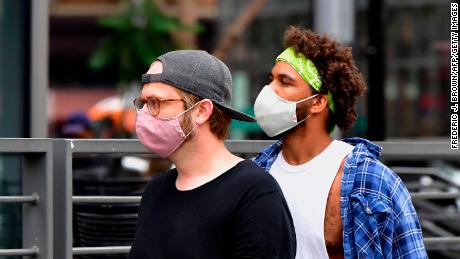 “We all live in a community of people, and therefore we have an obligation to each other, to our families, and to ourselves to do the best we can,” Markel said.

Masks won’t kill the virus, but wearing them reduces the odds of transmitting it and contracting it, Markel said. It also takes more than one tool, he said, including social distancing, avoiding crowds, and practicing proper hygiene.

“All these tools are like layers of Swiss cheese. They all have holes in it, but if you layer them together, you kind of block up the holes,” Markel said.

In 2020, masks use more advanced materials than the cheesecloth and gauze that our ancestors wore on their faces in 1918.

When it comes to wearing masks, “the real point of the matter is that it helps you. It helps others. So let’s do it,” Markel added.

Correction: An earlier version of this story incorrectly described the circumstances surrounding the death of a man after a dispute at a Michigan store. The man was shot and killed by police.