Erykah Badu is looking for clarity after getting back very bizarre COVID-19 test results.

On Friday the veteran songstress shared that she had tested positive for Coronavirus in her left nostril but negative in her right.

Taking her bewilderment to social media, she explained the situation to her fans – to the best of her knowledge, that is – before firing off a series of tweets as rapid as the test results. 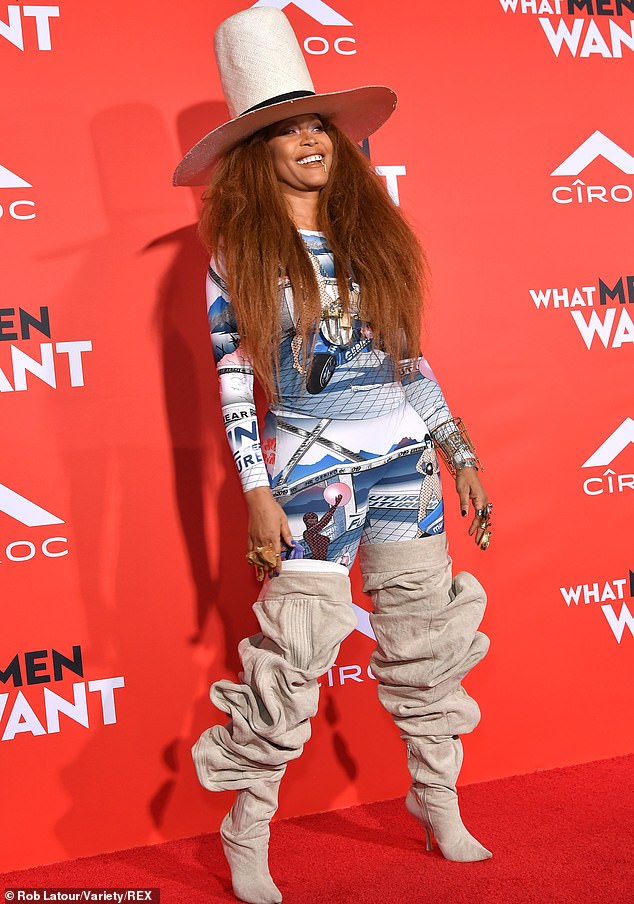 Bizarre: Erykah Badu, 49, tests positive for COVID-19 in her left nostril and negative in her right as she shares her confusion about the rapid test results on Twitter

Trying to make light of the situation she continued, ‘Maybe they need to call Swiss Beats so they can do a versus between them.’

‘Funny thing is, Dr. ONLY reported the positive result. What the fack is goin on here. Rapid Test. $$$$ smh,’ the post concluded.

She continued by posting a photo of her initial results with the doctor’s signature. 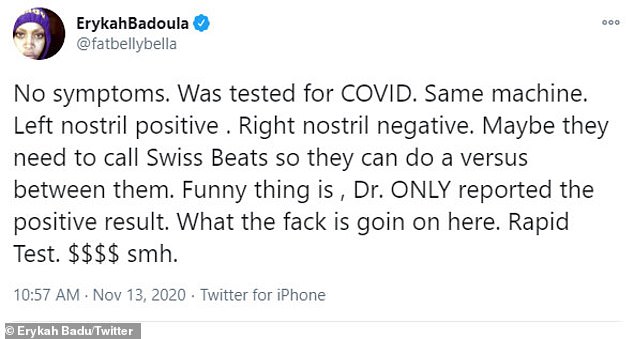 Rapid test: Badu took the rapid test as part of routine protocol ahead of a livestream broadcast with her band, as she joked that Swiss Beats should do a ‘versus’ between her two nostrils 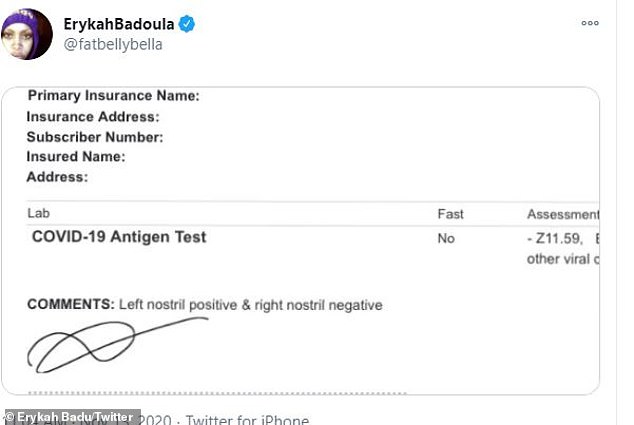 Badu took time to respond to concerned fans as she told them she was ‘Gucci’ and shared that she only got tested as routine protocol ahead of working on set for a livestream.

Getting two more tests to assure she was in the clear, Badu continued to let her followers in on her journey while questioning the accuracy of the tests.

‘This is my third rapid test in 24 hours. SMH. It’s routine to take c19 test before a livestream broadcast for all band and crew. Earlier I took 2 and one was positive the other neg in separate nostrils ?? We need to investigate these tests further. I want my $ back,’ she wrote.

She posted a video of herself with the tweet as she tried to make light of the situation while waiting to see if she was actually positive. 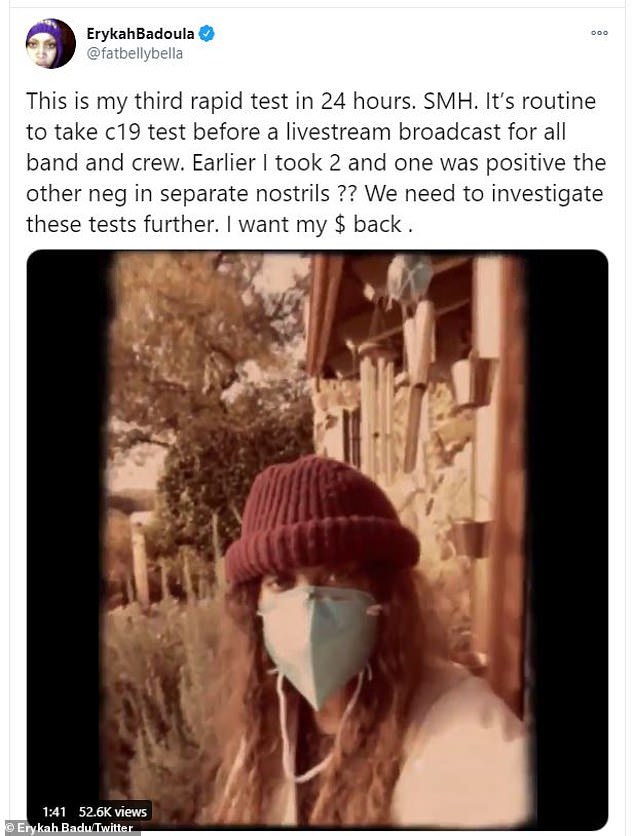 ‘Sick wid it’: While awaiting the results of yet another test, Badu tried to make light of the situation despite being ‘actually really scared,’ as she said she was ‘sick wid it’

She joked she was ‘sick wid it,’ but said that she was ‘actually really scared,’ because it would cause her to have to shut down her show.

With the test administers in the background, she counted down until the staff revealed that she was ‘negative’ on her third test as she gave a cheer of relief.

She continued to write, ‘What an inconvenience to be tested positive then negative 3x after within 24 hours. Same test. We understand that they aren’t 100% accurate but this is strange,’ she said.

Continuing to expose her playful side she engaged with a follower who laughed at the absurdity of the polarizing nostril results.

Snorting Covid: She engaged with fans who marveled at the absurdity of the results as she joked she was ‘snorting Covid’ as an explanation to the bizarre situation

Gearing up for another virtual show for her ‘Quarantine Concert Series,’ which she has been doing since March, she has found a way to continue making music in a new format.

Ten days after her tour was cancelled due to the pandemic, she took matters into her own hands hiring a live stream company as well as musicians, technicians and engineers.

For a fee of one to three dollars, fans get access to an intimate concert experience that she broadcasts live from her home in Dallas. 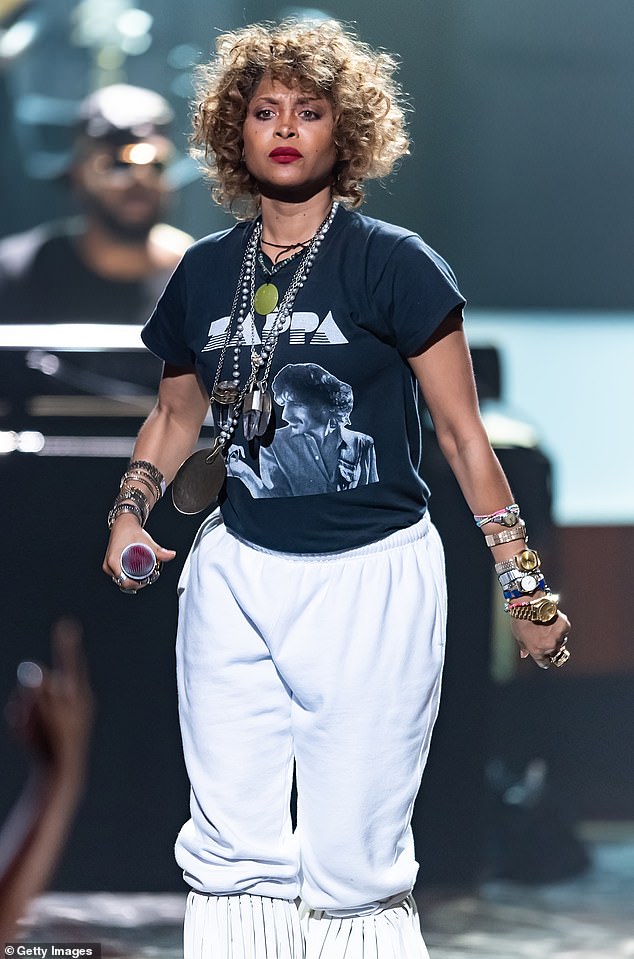 Virtual concerts: After her tour was cancelled due to the pandemic, Badu got creative and started live streaming from her home in Dallas, hiring a full team of technicians, musicians and engineers; pictured at Black Girls Rock! in 2019