The UK and other European countries locked down “too late” in autumn, a senior government scientific adviser has told Sky News.

Professor Neil Ferguson said ministers should have “learned the lessons properly from the first wave” to be in a “much better situation coming into Christmas”, given the vast speed at which coronavirus-related deaths grew.

He suggested autumn lockdowns did not last “long enough” and that politicians “could have responded faster” in the run up to the “stay at home” order being issued again at the start of 2021.

But Prof Ferguson, who sits on the government’s New and Emerging Respiratory Virus Threats Advisory Group, added measures like the creation of Tier 4 in England and the tightening of Christmas bubbles did help.

“We would have been in a much worse position had that not happened,” he told a special COVID Crisis: Learning the Lessons programme on Tuesday night.

The new variant discovered in Kent in December did “in some ways come out of the blue”, Prof Ferguson continued.

But he added: “You just need to look at the data – well over half of the people who died in this pandemic in this country have died in the last eight weeks… 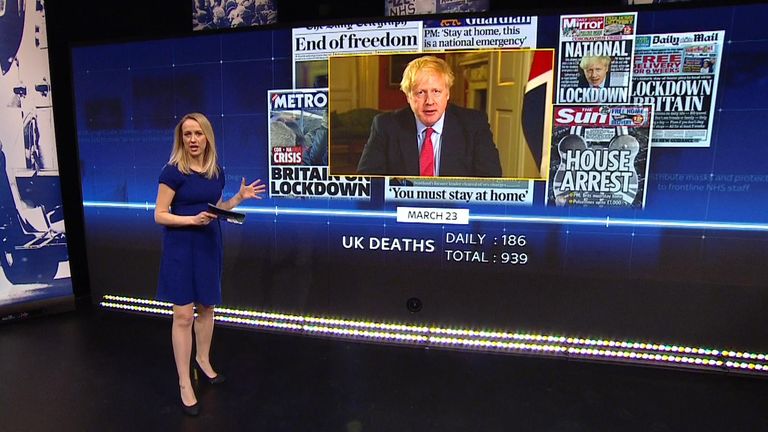 COVID-19: A timeline of events

“If you lock down earlier, you don’t suffer the same deaths and paradoxically there isn’t a trade off with the economy because you probably can lift lockdown measures earlier too you just keep infection levels low.”

So far 113,849 people have died within 28 days of testing positive for coronavirus – double the number of fatalities there were on 22 November 2020.

Sir David Nicholson, a former chief executive of NHS England, also pressed the case for an inquiry into the government’s handling of the pandemic – something Prime Minister Boris Johnson has said is not the right time for yet.

“How on earth are we going to get better?” Sir David asked.

“The way you get better is to recognise what you’ve done and then change as you go forward. It doesn’t take a genius to work out.”

She told Sky News: “The mistake we made is to try to flatten the curve and go into repeated cycles of lockdown instead of actually saying ‘how do we exit this once-and-for-all and get a full domestic recovery’? That requires fully suppressing the virus.”

Hard lockdowns are required initially but then cases should be kept low through rapid testing, making sure people isolate by not thinking they must go to work to earn and maintaining strict border measures to stop new variants being imported, said Prof Sridhar.

“We’ve taken a lot of costs without much benefit,” she reflected.

And Lord Kerslake, a former head of the home civil service and Labour adviser, said the government needed to work with conviction and clarity – but added “we didn’t get that along the way on a number of occasions”.

Over three nights Sky News will host a series of special programmes examining the UK’s response to the pandemic.