Government scientists want to keep social distancing measures in place for the foreseeable future in a move that would hit shops, pubs, cinemas and theatres, Sky News has learnt.

It comes as Prime Minister Boris Johnson made clear he would not allow the coronavirus to let rip through younger generations, suggesting he has embraced the idea of restrictions for some time to come, because “no vaccination programme is 100% effective”.

Whitehall has been braced for a “killer argument” in the coming days over how long to keep the “one metre plus” rule, with government scientists keen to maintain existing distancing requirements.

But some ministers are resisting as this issue is existential for many businesses; and they fear that additional ongoing restrictions on a near permanent basis could push some firms to bankruptcy.

The “one metre plus” approach, introduced last June, means members of the public can be one metre away from each other as long as other measures are put in place to limit the transmission of the virus.

If these are not possible then members of the public should be two metres away.

Possible mitigations include wearing a face covering, installing screens, making sure people face away from each other and providing extra handwashing facilities.

However, these restrictions make some businesses – particularly restaurants, bars and the leisure sector – harder to keep going since it means they can serve fewer customers.

A government source said: “This is the killer argument and no decision has been made. A lot rests on it for some businesses – the difference between being viable and not.”

A second senior Whitehall source confirmed no decision had been made on the “one metre plus” rule.

Ministers are coming under huge pressure from Conservative MPs to scrap all legally-binding restrictions at the end of April. 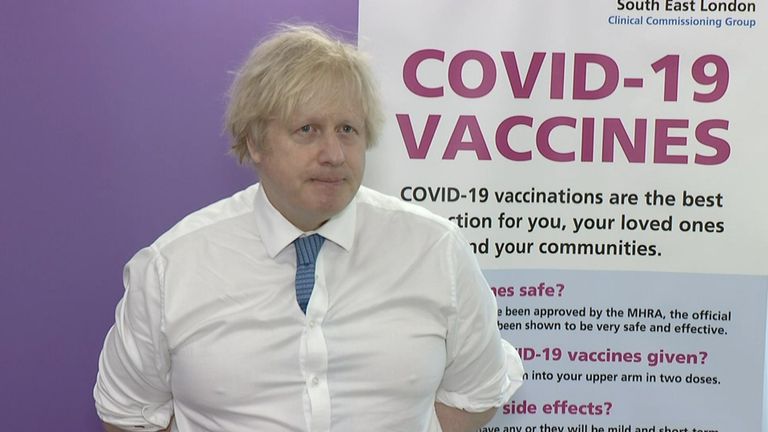 However, Downing Street is being warned by scientists that new variants of the virus will return next winter, likely to necessitate new restrictions.

Even once all adults have been offered the vaccine – which could come by May and at the latest will come at the end of the summer – some of the population will have not received the jab, while some vaccines might not offer much protection to new variants.

Scientists also do not know how long vaccines will offer protection for.

The prime minister said on Monday that there were dangers letting the virus circulate too freely amongst younger, unvaccinated groups.

“If you have loads of people, even young people, getting the disease then a couple of things happen – first of all, a higher risk of new variants and mutations within the population where the disease is circulating,” he said.

“Secondly, there is greater risk of the disease spreading into older groups again.

“Even though vaccines are effective and great, no vaccination programme is 100% effective.

“When you have a large volume, a lot of disease, inevitably a lot of people will suffer.”

Mr Johnson’s comments are likely to reassure those in Whitehall who wanted him to acknowledge that coronavirus was likely to be around for some time to come as part of decision making over the lifting of lockdown.

The prime minister also said he wanted his lockdown-lifting plan to be a “cautious but irreversible” approach.