The number of people with coronavirus antibodies in the UK is a third lower than previously believed, official figures show.

Public Health England data suggests just one in 10 people have the protective proteins in London when one in six did during the peak of the epidemic.

And less than 5 per cent of the population in the North East have the antibodies needed to battle the killer virus.

Chief Scientific Adviser Sir Patrick Vallance previously said to achieve ‘herd immunity’ about 60 per cent of the population needs to have been infected.

The Government had also touted the idea of ‘immunity passports’ for those who had battled the virus if scientists prove antibodies will stop a person catching it again.

Yet these plans appear to have been dashed due to such low numbers testing positive for the antibodies. 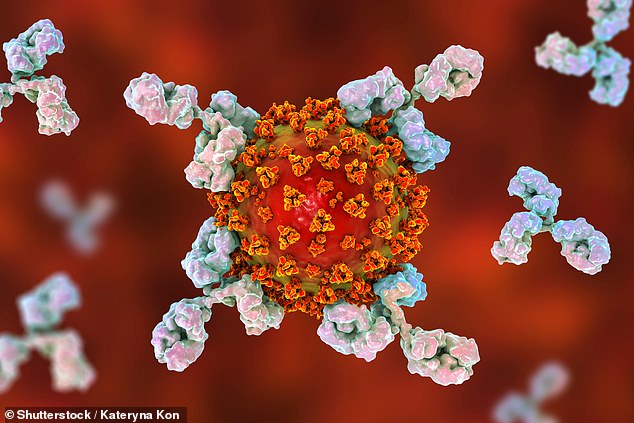 PHE’s results were from blood samples taken from donors in different areas of the country, according to the Sunday Telegraph.

It said earlier findings did not include tests on people over 70, who were not allowed to give blood during lockdown.

This appears to have caused the original figures to be misleading when used to represent the whole country.

The new data shows that about 6.5 per cent of England has the antibodies in their blood.

London had the highest figure – 9.9 per cent – with donors in the Midlands having 6.5 per cent and only 4.7 per cent in the North East.

PHE’s results match the Office for National Statistics’ findings, which said on June 29 the proportion of people with the proteins in the country was 6.3 per cent. 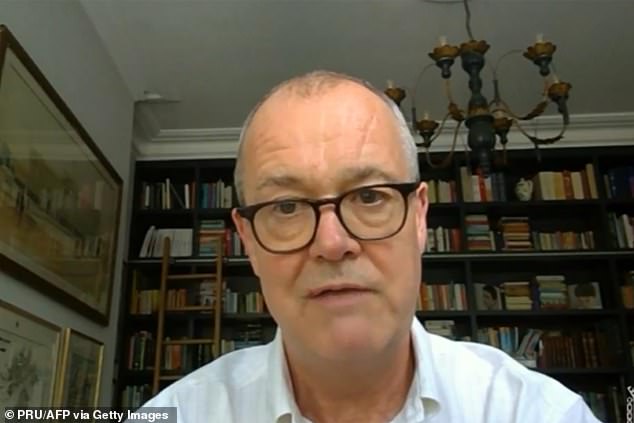 PHE Medical Director Yvonne Doyle said last week: ‘We reckon that over the peak we had in London about 16 per cent of the population were showing that they had antibodies.

‘This is dropping off now and it’s now much lower than that. Overall between six and 10 per cent of the population are showing those kind of antibodies, as we do our regular seroprevalence testing.’

PHE said ‘waning immunity’ might be a ‘contributory factor’ in the fall in positive antibody tests, but it was ‘likely to play a relatively small role in the overall trends observed to date’.

It said: ‘In more recent sampling periods, prevalence estimates are lower and this is likely to be largely driven by changes in the precise locations of sampling over time and potential demographic differences in the donor population as lockdown measures are relaxed.’

It comes after scientists claimed they had found the most potent antibodies yet in the blood of Covid-19 patients.

The antibodies were taken from the blood of several Covid-19 survivors and can neutralise the coronavirus, stopping it from entering cells.

These antibodies are cloned and scaled up in large quantities in the laboratory before being injected as a treatment.

Experts discovered a cocktail of the extremely strong antibodies protected hamsters from Covid-19 when exposed to the SARS-CoV-2 virus.

It is only early findings, but the scientists say the antibodies – proteins used by the immune system to destroy viruses – are ‘ready to be developed into treatments’. 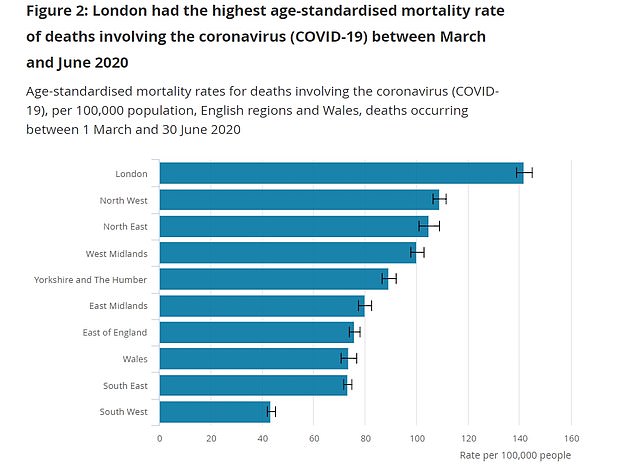 Despite seemingly having shut out the virus, London has still suffered the highest Covid-19 death rate of any area in the UK due to how hard it was hit by the disease early on in the crisis. The capital recorded 141.8 Covid-19 deaths per 100,000 people between march and June. The North West has been the second worst-hit area in the UK, recording 108.9 deaths per capita, closely followed by the North East (104.9) and West Midlands (100.2) 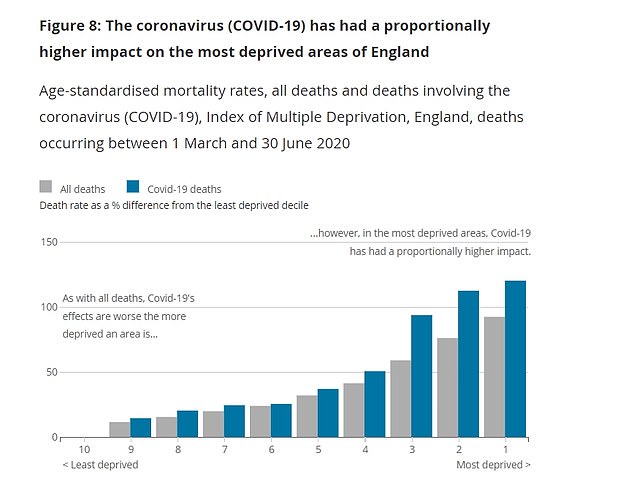 Administered in doses like a vaccine, scientists say antibodies could give humans the ability to avoid being struck down by the disease.

Antibodies made in the laboratory to mimic natural antibodies have been used in the treatment of a huge range of conditions, including arthritis, Crohn’s and Ebola.

Antibodies are proteins produced by the immune system in response to the presence of a foreign substance, like the coronavirus.

The role of antibodies is to latch on to foreign substances like the coronavirus and mark it for other immune cells, such as T-cells, to kill.

Neutralising antibodies are able to kill the virus themselves, rather than just tagging it for other immune cells to attack.

WHAT IS MONOCLONAL ANTIBODY THERAPY?

It’s given as an injection under the skin or through a drip into a vein.

The treatment works in many different ways. It can work in a vaccine-like way, protecting a patient from severe disease, or can help to stimulate the patient’s immune system to attack antigens.

Hybridoma technology is one method for producing large numbers of monoclonal antibodies – identical antibodies that are clones of a unique parent cell.

The process starts by injecting an animal, such as a mouse, with an antigen that provokes an immune response.

B cells produces antibodies that bind to the antigen. These antibody producing B-cells are then harvested and used to culture more antibodies.

The monoclonal antibodies are screened against their ability to work, with initial experiments in animals.

Major technological advances have made the discovery and development of mAb therapies quicker and more efficient, deriving the antibodies from humans and not animals.

Scientists can create a mAb that is specific to almost any antigen, and are working on one for the coronavirus.

The spike protein on the SARS-CoV-2 virus is the primary target being explored for potential Covid-19 monoclonal antibodies.

The aim is that by targeting the spike protein, the antibody will be able to neutralise the SARS-CoV-2 virus, therefore stopping it from infecting healthy cells.

A particularly interesting avenue is giving them to people who aren’t infected yet as a preventative tool. If the antibodies are potent and long-lasting enough, they could provide sufficient protection for a period of time before a vaccine is found.

Research and development is underway to create antibodies for diseases such as rheumatoid arthritis, multiple sclerosis, Alzheimer’s disease, and different types of cancers.

But many are already in use both in the US and UK.

Since 2008, 48 new mAbs have been approved, contributing to a total global market of 61 mAbs in clinical use at the end of 2017, according to the US FDA.

He said: ‘We now have a collection of antibodies that’s more potent and diverse compared to other antibodies that have been found so far, and they are ready to be developed into treatments.’

Forty Covid-19 patients who were treated at Columbia University Irving Medical Center in New York City, but had since recovered were enrolled for the research.

Blood samples from all were first tested for neutralising activity against the virus. Scientists put their blood in a petri dish to see if antibodies attack or bind to the virus.

The five patients were all hospitalised for Covid-19, suggesting those with severe disease requiring mechanical ventilation produce the best neutralising antibodies.

Among them, 19 neutralising antibodies which ‘exhibited exquisite potency’ were discovered, according to the findings published in the journal Nature.

Professor Ho said: ‘We think that the sicker patients saw more virus and for a longer period of time, which allowed their immune system to mount a more robust response.

‘This is similar to what we have learned from the HIV experience.’

The research team found a more diverse variety of antibodies than previous efforts, including new, unique antibodies that were not reported earlier.

The findings also revealed which sites on the viruses outer ‘spike’ are most vulnerable.

Professor Ho said: ‘Using a cocktail of different antibodies that are directed to different sites in spike will help prevent the virus becoming resistant to the treatment.’

The researchers took the neutralising antibodies and engineered them in the laboratory to create monoclonal antibodies (mAbs) – clones that work in the same way as the natural antibodies.

To assess if they worked, the researchers exposed hamsters to the coronavirus after an injection of the mAbs.

Hamsters given a higher dose of mAbs had considerably less viral particles than those given a low dose as a control group.

The researchers said there was ‘complete elimination of infectious SARS-CoV-2 at a relatively modest antibody dose’.

Professor Ho is hopeful the findings will lead to treatment in people, which would first require clinical trials to ensure safety.

It’s not clear how long this would take, but it may be quicker than a number of drugs and vaccines in development for Covid-19.

The development and approval of antibodies for use as a treatment usually takes less time than conventional drugs.

Scientists all over the world are looking at monoclonal antibody therapy for the new coronavirus but there are few currently in clinical trials.

Drug giant AstraZeneca also revealed it was working on an injection with cloned antibodies that could be ready next year.

Chief executive Pascal Soriot told the Sunday Telegraph the therapy being made is ‘a combination of two antibodies’ in an injected dose.

If the immune system can generate such strong antibodies, vaccines that do the same ‘should provide robust protection against the virus,’ Professor Ho said.

However, questions remain over whether Covid-19 survivors develop any immunity once they recover from the disease.

Therefore, it will not be clear how long antibodies produced triggered by a vaccine would protect a person.