Alleged design schematics for an updated iPad with a 10.8-inch display have been shared by 91Mobiles. 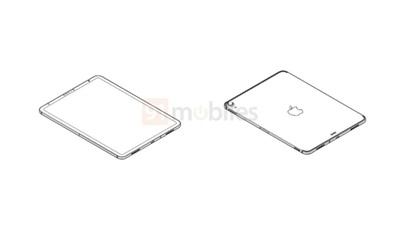 The schematics reportedly show an ‌iPad‌ with a 10.8-inch display. This correlates with a previous report from supply-chain analyst Ming-Chi Kuo, which said that Apple plans to launch a new 10.8-inch ‌iPad‌ in the second half of 2020.

Although 91Mobiles claims that the schematics are for a low cost, eighth-generation ‌iPad‌, it is also possible that the device depicted is in fact an ‌iPad‌ Air 4.

Earlier this week, photos purportedly showed a leaked manual for the ‌iPad‌ Air 4, and the ‌iPad‌ from that leaked manual looks identical to the device in these schematics. Ming Chi-Kuo’s report also did not specify if the 10.8-inch ‌iPad‌ model will be a new version of the existing 10.2-inch ‌iPad‌ or the 10.5-inch ‌iPad‌ Air, and it seems that leaks about both iPads may have been conflated. 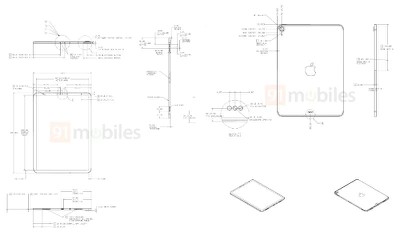 The schematics suggest that the unreleased ‌iPad‌ is to have dual speakers, four microphones, and a USB-C port. The rear of the device shows a single camera with an LED flash and a magnetic smart connector. The placement of this smart connector bolsters previous rumors that the Magic Keyboard accessory will be supported by new ‌iPad‌ models.

91Mobiles claims that this ‌iPad‌ will have Face ID, but that seems unlikely given rumors of the ‌iPad‌ Air 4 having a Touch ID sensor on the power button instead of Face ID.

The images indicate that the device will look similar to the iPad Pro, with thinner bezels and squared-off edges. A four stereo-speaker setup and dual cameras would be reserved for the ‌iPad Pro‌. If this device is indeed the low-cost ‌iPad‌, the schematics would indicate that Apple is looking to consolidate design language across the ‌iPad‌ lineup. It is also possible that both the low-cost ‌iPad‌ and ‌iPad‌ Air 4 will share the same design, hence the conflation of leaks, but differ in terms of internals.

The new ‌iPad‌ is rumored to launch as early as next month. Apple filed a lengthy list of unreleased ‌iPad‌ and Apple Watch models in a Eurasian database this week, signaling that new devices are on the horizon. According to leaker Jon Prosser, Apple plans to introduce at least some new ‌iPad‌ and ‌Apple Watch‌ models via a press release in September, followed by new iPhones at an event in October.