The financial details of the Patriots’ new deal with Cam Newton make it clear that New England is leaving its options open with respect to the quarterback position, and the Jimmy Garoppolo rumblings continue to persist. In a recent appearance on the PFT PM podcast, Tom Curran of NBC Sports Boston said a New England-Garoppolo reunion remains a possibility even after the Newton re-up (via Mike Florio of Pro Football Talk). 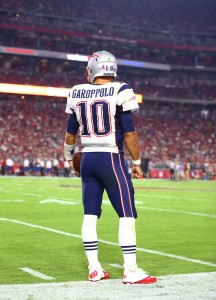 Of course, the 49ers would need to make Garoppolo available via trade, and that situation is a little murky. San Francisco GM John Lynch said last month that he had no doubt Garoppolo would be his starting QB in 2021, but just a few days later, a report surfaced indicating that Jimmy G was still on the trade block.

According to Florio, the Niners continue to seek an upgrade, and if they find one, obviously Garoppolo would stand to be dealt. Though he would need to waive his no-trade clause, that probably wouldn’t be a problem if San Francisco brings in, or is planning to bring in, a player that could pose a threat to his starting job.

As Mike Reiss of ESPN.com points out, getting a legitimate quarterback under contract was key for the Patriots with free agency opening this week. Although there are plenty who believe Newton is simply not a viable starter anymore, he is still a beloved figure among players, and the Pats — who have among the most salary cap space in the league — figure to be active players in the market. The club has been connected to some of the top receivers and tight ends available, and those players would probably not even consider Foxborough if Jarrett Stidham was the only passer on the roster. So while the Newton deal doesn’t assure him of anything, it needed to be done.

For his part, Newton expects to take a major step forward in 2021 if given the opportunity. He recently posted a hype video to Instagram promising a return to form next season, and depending on how things shake out in free agency and the draft, he just might get that chance. If nothing else, the fact that the Pats brought him back suggests that the team believes he could look more like his old self with a better complement of weapons surrounding him.